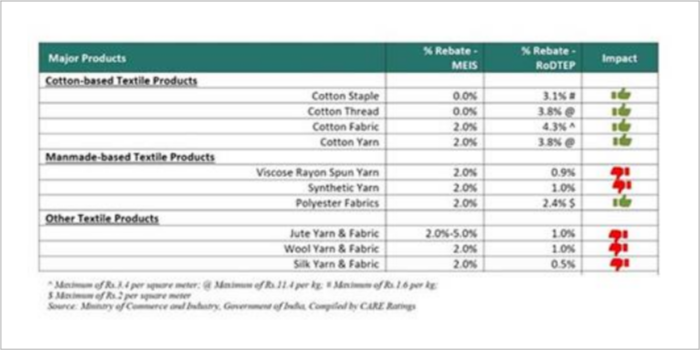 According to the rating agency, cotton-based textile products emerge as a clear winner with additional incentives of Rs 750-850 crore in the new rates of rebate under RoDTEP.

With
additional incentives of Rs 750-850 crore in the new rates of rebate the
Remission of Duties and Taxes on Exported Products (RoDTEP), cotton-based
textile products emerge as a clear winner, according to CARE Ratings.

The
rates of rebate under RoDTEP scheme, which were notified on August 17, 2021,
are significantly lower compared with the earlier Merchandise Exports from
India Scheme (MEIS) for majority of the products/ sectors. Further, many
industries, viz., pharmaceutical, chemical, and steel, where India enjoys
global competitiveness or there is a short supply in the domestic market have
been excluded from the scheme.

â€œAmongst
the various sectors, cotton-based textile products have received favourable
rates under RoDTEP in the range of 3.8%-4.3% as compared to around 2% rate
under MEIS although there is a cap on the maximum benefit available under RoDTEP.
As per the data available from Directorate General of Foreign Trade (DGFT), the
average export of last 3 years period ending FY21 for cotton staple, cotton
thread, cotton fabric and cotton yarn stood around $6.5 billion. Considering
the average incremental rebate of around 1.5%-1.8% for these products, it
translates into additional export incentive of Rs 750-850 crore per annum for
the sector,â€ said CARE Ratings in a press release.

Another
change is the likely impact of exclusion of the Advance Authorization scheme or
Duty-Free Import Authorization on products manufactured and exported in
discharge of export obligation. With lower rates of rebate, it is to be seen
whether certain industry players avail benefits under the RoDTEP scheme or opt
for duty-free import. Those industries which are heavily dependent on import
and have relatively lower rebate rates are at a disadvantageous position
compared to MEIS.

scheme
having remained in limbo for long, the present policy action at least gives
clarity to the stakeholders to adequately price their products in the export
markets,â€ added the rating agency.

After
the World Trade Organisationâ€™s (WTO) ruling that found the MEIS and some other
export incentive schemes in violation of WTOâ€™s agreement on Subsidies and
Countervailing Measures (SCM), the Union Cabinet on March 13, 2020, approved
the RoDTEP scheme to replace MEIS with effect from January 1, 2021. RoDTEP aims
to reimburse local taxes, coal cess, mandi tax, electricity duties and tax on
fuel used for transportation incurred by exporters, which are not exempted or
refunded under any other existing scheme. The primary objective behind the
scheme is to improve competitiveness and create a level- playing field for
Indian manufacturers in the global market. After a long wait, the Government of
India announced the rates of rebate under RoDTEP on August 17, 2021, which
would be effective from January 1, 2021.

The
RoDTEP scheme has declared remission rates on 8,555 tariff lines. The new
remission rates range from 0.3% to 4.3% of the Free-on-Board (FOB) value of
exports. As per the media release issued by the Ministry of Commerce and
Industry, the government has largely tried to cover employment-oriented sectors
such as textile, marine, agriculture, leather, gems & jewellery,
automobile, plastics, electrical/electronics, machinery, etc, with which the
entire value chain of textile sector gets covered through RoDTEP and the
previously announced Rebate on State and Central Levies and Taxes (RoSCTL)
scheme.