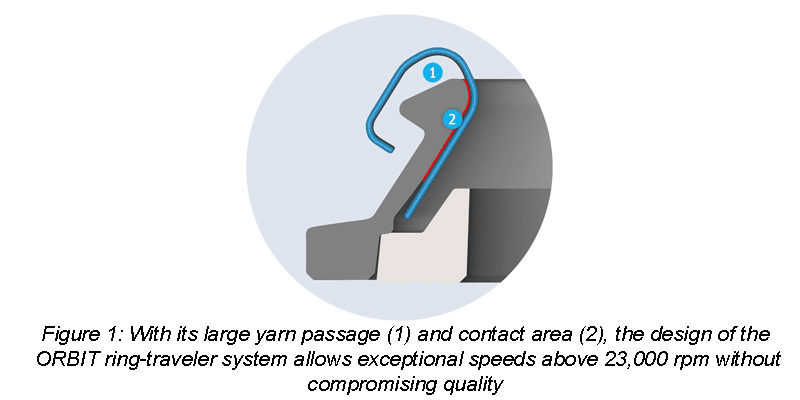 ORBIT ring-traveler system: The reference to spin faster and better

Recent tests conducted at spinning mills across the world confirm that even at higher speeds, the ORBIT shows better results in yarn quality than traditional systems.

The key to success of a ring spinning mill lies in its ability to produce flawless quality with the highest possible production speed. Selecting the best ring-traveler system is crucial here. ORBIT allows exceptional speeds above 23,000 rpm without compromising quality.

When the spindle speed is increased, the frictional power between the ring and the traveler, and thus the heat generation, increases exponentially. When speeds are too high, C-shaped travelers are therefore thermally damaged and fail.

Increase in speed and production

The ORBIT features a large contact surface between the ring and the traveler (Figure 1), which is four to five times bigger than that of a T-flange ring. This drastically reduces the pressure and thus the heat generation. It also provides more stable running conditions and allows the traveler weight to be reduced, so speeds above 23,000 rpm can be reached.

The size of the yarn passage also plays an important role (Figure 1), especially when processing man-made fibers which are prone to heat damages. The ORBIT ring traveler system benefits from a large yarn passage which minimises thermal damages for better yarn quality.

The large contact area of ORBIT between the ring and traveler contributes to the gentle handling of fibers. The stable running conditions coupled with the reduced surface pressure and the optimal heat conduction result in low yarn breakage rates. Recent tests (Figure 2) conducted at spinning mills across the world confirm that even at higher speeds, the ORBIT shows better results in yarn quality than traditional systems.

Bräcker, the world’s leading supplier of rings and travelers for ring spinning systems, is a subsidiary of the Rieter Group. Bräcker, based in Pfäffikon ZH (Switzerland), creates customer value through system expertise, innovative solutions, after sales excellence and global presence. The company manufactures its main products – rings and travelers for ring spinning machines – in Pfäffikon and Wintzenheim (France). In addition, Bräcker offers grinding machines used for maintenance of cots.

Rieter is the world’s leading supplier of systems for short-staple fiber spinning. Based in Winterthur (Switzerland), the company develops and manufactures machinery, systems and components used to convert natural and man-made fibers and their blends into yarns. Rieter is the only supplier worldwide to cover both spinning preparation processes and all four end-spinning processes currently established on the market. Furthermore, Rieter is a leader in the field of precision winding machines. With 17 manufacturing locations in ten countries, the company employs a global workforce of some 4,900, about 18 per cent of whom are based in Switzerland.