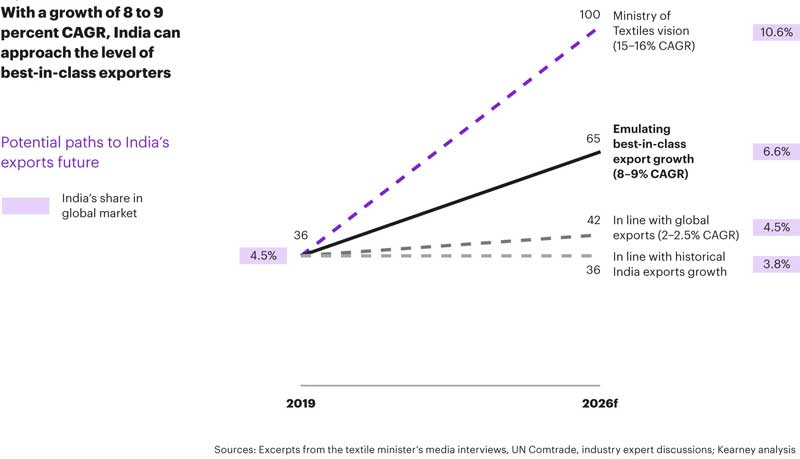 India needs to reinvent itself to increase textile exports

The post-COVID world – with a realignment of geopolitical relations – presents a chance to India to reclaim its top position in the global textile market. With targeted actions from government and industry players, India can gain a leading edge on the global stage, says this CII-Kearney report.

The textiles industry is the backbone of India’s economy, making major contributions to both employment and exports. Textile products hold a key position in the global value chain, with India being the world’s fifth-largest exporter for apparel, home, and technical products. This industry employs almost 45 million people in the farming and manufacturing sectors.

However, the country’s recent performance in global trade has not been commensurate with its abilities. Exports declined by 3 percent during 2015–2019 and by 18.7 percent in 2020. And yet during the same period, other low-cost countries such as Bangladesh and Vietnam have gained share.

A variety of factors have contributed to India’s recent trade performance, including the following:

However, against this backdrop, India’s textile industry also saw positive developments, such as dominance in home textiles and favourable geopolitical undercurrents encouraging the China Plus One sourcing strategy, which promises a better future. Moreover, the government’s focus on textiles is at an all-time high, which bodes well for the industry’s future.

The strong government focus is accentuated by the launch of multiple schemes, including the following:

COVID-19 has triggered the redistribution of global trade shares and a recalibration of sourcing patterns, providing a golden opportunity for Indian textiles to stage a turnaround and regain a leadership position as a top exporting economy. We believe India’s textile industry should target 8 to 9 percent CAGR during 2019–2026, driven by domestic demand growth and significant growth in annual exports (reaching $65 billion by 2026). The Ministry of Textiles has set an even higher export target of $100 billion over the next five years—growth that should help generate 7.5 million to 10 million direct new jobs in textiles.

Achieving the $65 billion exports target – up from $36 billion in 2019 – will require India to double down in the following areas:

The path to achieving these targets will entail both government and industry taking crucial steps. The biggest prerequisite will be to attract new investments of $20 billion to $25 billion. The government, which has already made major announcements in this regard with the PLI, MITRA, and RoDTEP schemes, must follow through with efficient implementation and suitable tweaks based on feedback.

India should also take on the following imperatives:

The other important theme is to ensure that businesses scale up and operative effectively with the right profitability and service levels. The following initiatives can help India achieve this:

India must also guard itself against falling yields in cotton fiber. (The annual yield dropped below 500 kg per hectare for four out of six years during 2013–2019 while it crossed 500 consistently during 2011–2014.) The country must promote the introduction of new seed technologies, which could help counter the menace of insects, which are now resistant to older technologies, and thereby boost the crop yields in the future.

India should aim to project the country’s textiles industry as a one-stop destination for products that are manufactured in a sustainable manner in transparent value chains with best-in-class quality at competitive costs and lead times. This will truly differentiate India for global consumers.

These imperatives are a steep ask for all stakeholders, be it the government or the textiles industry. But India’s performance over the next five years could set the pace for many years to come. With the country’s global positioning and millions of jobs at stake, India will have to move—and move fast—on all defined fronts. Time has given India an opportunity to reinvent itself. It’s time to grab it with both hands.