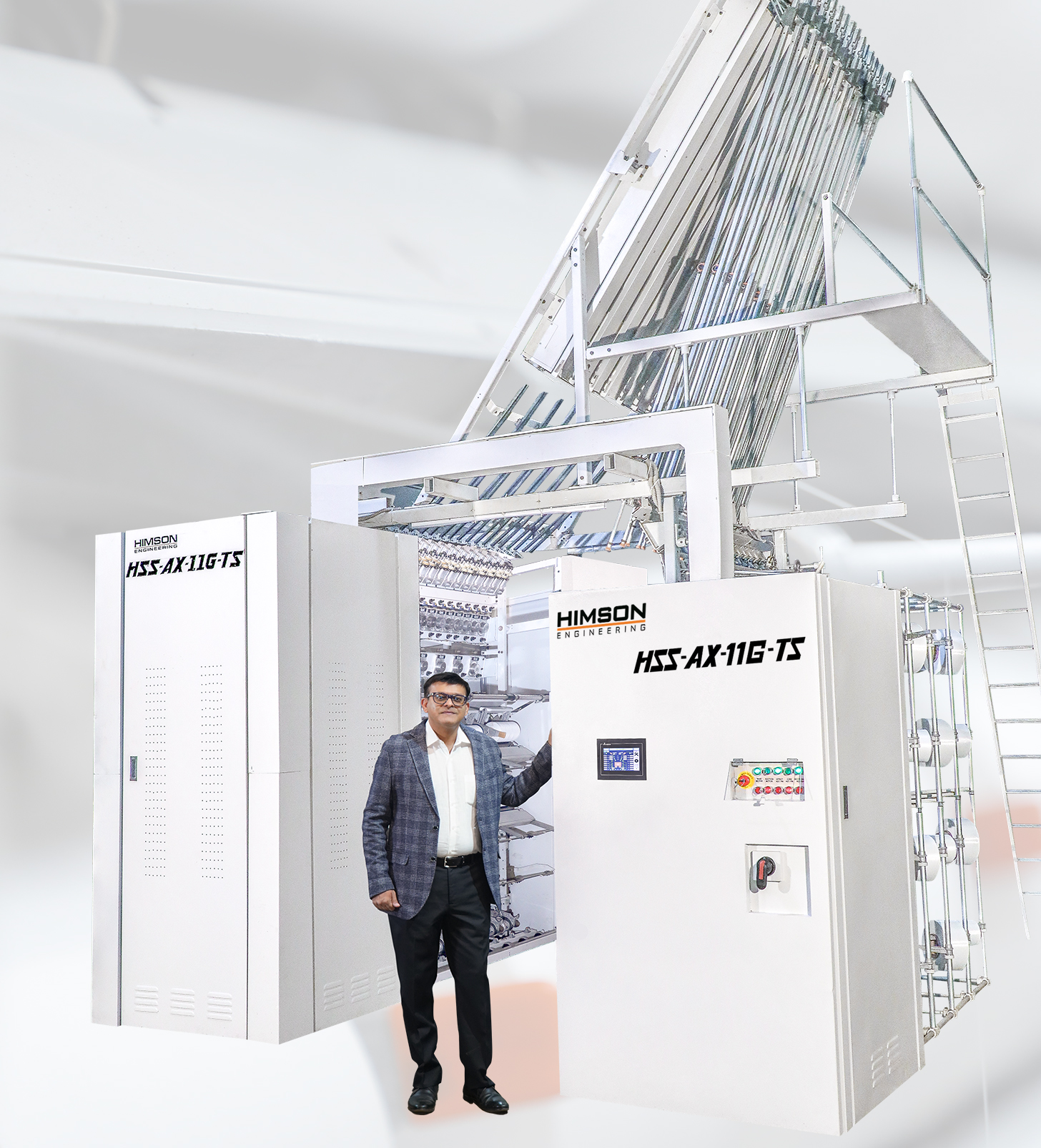 With the launch of the new false-twist texturing machine HSS-AX4-11G / AX-11G-TS, Himson Engineering Pvt Ltd is offering the right tool for this specialties market.

The Himson 3 Deck (single density) & 2 Deck (double density) machine concept for various applications False-twist texturing is a cost-competitive sector of the textile industry. A winning strategy in this area is to produce specialty yarns with added value. With the launch of the new false-twist texturing machine HSS-AX4-11G / AX-11G-TS, HIMSON is offering the right tool for this specialties market, said Darshan Bhogilal Bachkaniwala, Director of Himson Engineering Pvt Ltd.

Polyester DTY (Drawn Textured Yarn) was first produced in the 1960s and has since become a commodity yarn. However, over time, polyester yarns have evolved to be used in a variety of specialty yarns, ranging from coarse denier per filament (dpf) to micro-filament and even super-micro-filament yarns. These yarns can be used to produce fabrics with a very soft touch and a light weight. Himson’s new generation machine with godet feeding system will enhance the processing in terms of quality and productivity for micro filament & super-micro-filament.

Filaments with different cross-sectional shapes improve perspiration evaporation or provide the fabric with a distinctive lustre. Another specialty is achieved by encapsulating functional chemicals directly into the polymer to create fabrics with additional characteristics such as anti-bacterial properties to eliminate odours or using infrared body emissions to increase body temperature. Furthermore, an increase in dope dyed POY (Partially Oriented Yarn) brings advantages for colour fastness and in terms of environmental friendliness, as no subsequent dyeing is required.

HSS-AX4-11G / AX-11G-TS is the world’s most productive DTY machine with 360 & 224 positions simultaneously excels in terms of its extremely space-saving construction.

With the HSS-AX4-11G / AX-11G-TS, Himson has introduced its latest DTY innovation, an extension of the automatic & manual draw texturing machine family. With this, customers are able to texture their products on a machine with the operator friendly motorized godet FG1, FG2 & FG2X within the DTY market. Moreover, they benefit from stress free yarn feeding, considerable reduction in energy consumption, and truly constant thread quality throughout production offered by the HSS-AX4-11G / AX-11G-TS compared to other texturing machines supplied by competitors.

Over the past few decades, machine lengths have grown from fewer than 240 to 360 and finally 448 positions. Today, the Himson Engineering DTY machine portfolio offers manual or automatic machines model HSS-AX5-15G with up to 448 positions for all cross-sections; it is going to be launched in upcoming India ITME 2022 exhibition, said Darshan Bhogilal Bachkaniwala.

With the aim of developing a machine concept that was more productive than the existing 4-deck machines, Himson Engineering concentrated on a new concept for the automatic & manual machine family with the following objectives:

The result of the development efforts is the HSS-AX5-15G.

The machine spindles with up to sports a 4-deck take-up solution to increase the throughput capacity while improving the economy of the process.

While adding a fourth deck, four positions have been added to further improve the yarn to mÂ² ratio. In order to achieve an increase of yarn ends in the same given space, all single components in the yarn path prior to take-up have been addressed.

Concept-wise, the HSS-AX5-15G comprises an Himson Engineering multi-spindle texturing zone design, which from the start allows single-yarn treatment with single-driven friction aggregates. To allow the additional yarn ends to be further processed, the feed system, the string-up as well as the first and secondary heaters had to be redesigned in addition to the general changes applied to the take-up unit. Optimised yarn handling was the primary focus of the development.

The HSS-AX5-15G in the standard cross section offers the customers a process window of 30-300 den at a maximum mechanical speed of 1,100 m/min. The yarn ends per section have been increased from 24 to 32, with the expansion of take-up positions while adding a fourth deck. All single components have been re-engineered with this space optimisation in mind.

The FG1/FG2/FG2X godet feeds have been redesigned, decreasing the diameter to allow proper single-feed treatment.

The first heater has been redesigned to provide greater savings and with a higher number of yarn ends in mind, resulting in 10-15 per cent energy savings potential compared to a conventional 2 m first heater. The new energy-saving secondary heater has been introduced, also with up to 10-15 per cent energy savings compared to conventional secondary heaters.

The new design Rotary Creel, included as standard, has been improved for easier handling and loading for the higher number of POY bobbins. Highest yarn density with up to 448 positions

In comparison to its peers, the HSS-AX5-15G has a mÂ²-to-yarn-end ratio of 0.68 mÂ² per yarn end in its most space saving design, which saves up to 15 per cent of space at the same throughput per position in comparison to alternative machine concepts. A production machine with 14 sections now offers a maximum of 448 positions. Each side has 224 positions equal to a complete machine of today’s standard. Drastically reduced space requirements are combined with the highest energy-saving potential. “With the HSS-AX5-15G, Himson Engineering today already shows manufacturers how they can optimise the production processes of the future .As a group, we are very much looking forward to participating at the ITME and meeting our customers,” said the company in a press statement.