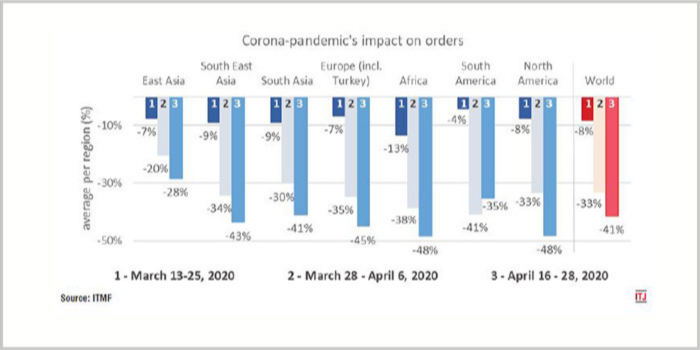 Worldwide, current orders down by -41%

Between April 16-28, 2020, ITMF has conducted a third survey among ITMF Members and affiliated companies and associations about the impact the Corona-pandemic on the global textile value chain, especially on current orders and expected turnover in 2020.

Between April 16-28, 2020, ITMF has conducted a third survey among ITMF Members and affiliated companies and associations about the impact the Corona-pandemic on the global textile value chain, especially on current orders and expected turnover in 2020. In total 600 companies from around the world participated. Worldwide, current orders are down by -41 per cent on average.

Orders in East Asia dropped visibly less (-28 per cent) than in all the other regions (-40 per cent and more). It can be assumed that this region, which was hit first by the Corona-crisis, is also recovering first from it. Especially China and Korea were able to contain the epidemic successfully. In the last few weeks, most Chinese textile companies have ramped up production significantly. Likewise, off-line retail stores have reopened, and consumption is picking up again in East Asian countries. It remains to be seen what the consumption behaviour will be like in China, Korea and other places once shops are open again. Worldwide, expected turnover 2020 is down by -33 per cent on average compared to 2019

Companies in Europe are expecting turnover in 2020 to be down by â€œonlyâ€ -22 per cent, a figure significantly better than the -33 per cent reported in the second survey. Companies in East Asia are expecting turnover to be down by -26 per cent, which is close to what was reported in the second survey (-24 per cent). Companiesâ€™ turnover expectations in South East Asia and South Asia on the other hand have deteriorated significantly. These regions were hit later by the Corona-pandemic and hence the full impact was felt with a delay. Compared to 2019, expected turnover for 2020 is down to -38 per cent in South East Asia and to -31 per cent in South Asia. Turnover expectations in Africa, South America and North America have not changed much since the second survey.