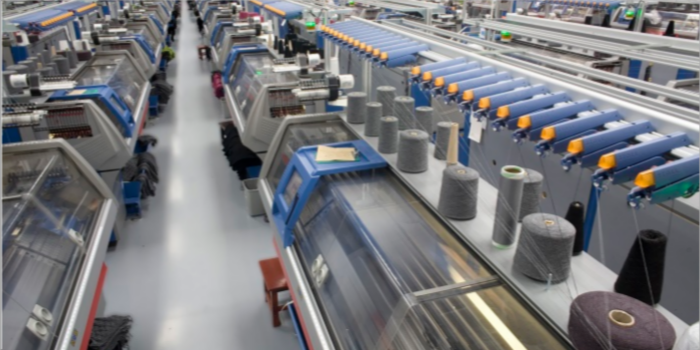 The knitting process is a highly productive method for manufacturing drapable, textile surfaces. The high productivity results in a correspondingly high dynamics of the mechanical components. This in turn results in high wear of friction-loaded machine elements such as cam parts, needles and bars. Friction and wear cause additional annual costs for companies in the range of 5 per cent of the purchase price of a knitting machine. Across Germany, these costs add up to around Euro 5.7 million. According to the current state of the art, wear is countered by oil lubrication of the mechanical components and a reduced production speed at which the heat generated has no negative impact on the production process.

Objective
Therefore, the objective of the ZIM research project SAMStrick (ZF4018786CJ7) is the development of an innovative combination layer of tetragonal amorphous carbon (ta-C) and Diamond Like Carbon (DLC). The layer structure allows wear protection and friction reduction to be achieved simultaneously. The excellent dry-running properties of the DLC layer for friction reduction are combined with the extraordinary wear resistance of the ta-C layer. The aim is to reduce or even completely eliminate the use of machine oil as a lubricant. Such a combination layer is currently not available on the market and is being developed by the project partner SAM Coating GmbH, Eggolsheim (Germany), as part of the SAMStrick research project.

The special challenge here is the complex geometry of the lock parts to be coated and the guarantee of a reliable layer structure of the combination layer in continuous operation. The complex geometry of the interlock parts makes it difficult to coat the functional surfaces uniformly using the Physical Vapour Deposition (PVD) process. The aim of coating development is to reduce the wear-related costs of knitting machines in Germany by 20 per cent. In addition, the friction-related heat development on the knitting machine is to be reduced by 10-degree Celsius.

The approach to achieve this goal is the development of a combination layer consisting of a ta-C base layer and a t-DLC top layer. In order to ensure functionality even under extreme conditions (dry running), the DLC layer is additionally doped with tungsten. The challenge of a reliable layer structure can be met with a suitable interface between DLC and ta-C layer. The design of the interface is the core competence of the project partner SAM Coating. The production-related surface roughness of the substrate is increased by the ta-C coating process (Figure 1).
Figure 1: Schematic representation of the structure of the combination layer

In contrast, the t-DLC above reduces the surface roughness of the ta-C layer due to the process by even condensation on the lock part surface (Ra = 0.3 – 0.4 µm). Under tribological stress, the W-DLC top layer gradually wears away, exposing increasing roughness peaks of the ta-C layer. These are sheared off as a result of the high, punctual load, so that the roughness peaks of the ta-C layer are removed together with the t-DLC layer. During the run-in process, the good dry friction properties of the t-DLC layer thus take effect, while simultaneously creating a smooth surface of the underlying ta-C layer (Ra ˜ 0.2 µm). This results in a ta-C layer which is low friction due to its smoothness and at the same time wear-resistant due to its hardness (approx. 8000 HV).

Figure 2: a) schematic representation and b) illustration of the tribological knitting test bench

In the tribological knitting test bench, lock parts can be mounted on an inner and an outer track. The needles, which are radially mounted in the rib discs, are moved through the lock part channel by the rotation of the rib disc with the needle foot. The rib disc is driven at a defined speed (TDrive) and the resulting torque is recorded on the lock parts by means of a measuring ring in the test (Tresult). The applied torque can thus be used as a measurement of the friction between needles and cam parts. In addition, the temperature of the lock parts is recorded by two permanently installed measuring sensors and oil is supplied at a defined volume flow rate via three oilers per lock part track. The rib disc itself has four different sectors in which needles of different fineness can be used. In the next step, this allows the tribological system to be determined which is used on the test stand to display the real tribological contact in a knitting machine in an abstract form (Table 1).

Table
1: Components of the abstract, tribological system on
the knitting test bench

Main Tests
In the main trials, the current state of the art (uncoated steel lock parts) are tested against conventional coatings (DLC, t-DLC) and variants of the novel combination coating (t-DLC/ ta-C). Lock parts from the company Beck GmbH, Albstadt-Lautlingen (Germany), and needles from the company Groz-Beckert KG, Albstadt (Germany), are used. The test parameters as well as the exact designations of the components used can be found in Table 2.

Figure 3 shows an overview of the measured surface roughness Ra before and after the main tests.The measurement of the surface roughness allows conclusions to be drawn about wear and, after completion of the test period, is also an indicator of surfaces with suitable friction properties, since in the tribological system under consideration, low surface roughness leads to low friction.

Figure 3: Overview of the surface roughness Ra before and after the 7 h 5 min test duration of the main tests

Due to the high standard deviation, the measured values of the steel lock parts (V0, 0 min) do not allow a statistically reliable statement about the condition before the test was carried out. The high standard deviation is probably due to grinding grooves in the surface of the lock parts, which occur when polishing the functional surface. After the test, however, the surface roughness is higher than that of the combination layer (V3 and V5, 7 h 5 min), which indicates higher friction and heat development of the steel lock parts in comparison. The surface roughness of the combination layers decreases over the test period, which is typical for a run-in process of a harder (coated lock part) and a softer (needle) friction partner. The t-DLC top layer wears out and the breaking points of the ta-C base layer are sheared off, resulting in a very smooth surface (Ra ˜ 0.2) with lower friction coefficients and therefore a lower torque.

The DLC layer shows no change in surface roughness, which indicates that there are no significant signs of wear in the investigated test frame. The surface roughness of the t-DLC layer increases over the test period, which can only be attributed to a failure of the entire coating. The roughness of the combination layer V4 apparently increases over the test, although this statement is also not certain due to the high standard deviation. For a final statement on V4, the evaluation of torque and temperature is therefore taken into account.

Figure 4: Detailed view of the torque towards the end of the test period

Figure 5: Course of the temperature increase of the main tests

Acknowledgement
The research project ZF4018786CJ7 of AiF Projekt GmbH, Berlin (Germany) is funded by the Federal Ministry of Economics and Energy within the framework of the Central Innovation Programme for SMEs (ZIM) based on a resolution of the German Bundestag.