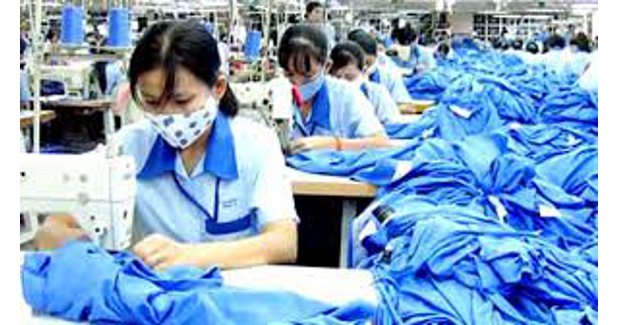 A number of yarn, weaving and dyeing projects in Vietnam have restarted after a period of postponement due to the US withdrawal from the Trans-Pacific Partnership (TPP). However, the textile & garment industry still faces difficulties.

A number of yarn, weaving and dyeing projects in Vietnam have restarted after a period of postponement due to the US withdrawal from the Trans-Pacific Partnership (TPP). However, the textile & garment industry still faces difficulties. Trillions Enterprise, an investor from Brunei, which has a dyeing and weaving factory in Tan Duc IZ in Long An province, has asked for five more hectares of land in the IZ to scale up its production. Long Thai Tu Yarn, a South Korean enterprise, has decided to invest $50 million more to expand the workshop in Long Khanh IZ in Dong Nai province.

In Binh Duong province, Taiwanese Far Eastern has registered additional investment capital of $485.8 million, raising its total investment in Bau Bang IZ to $760 million after two years of operation. A representative of the group admitted that it registered investment in Vietnam in 2015 to take full advantage of TPP. However, the manufacturer wonâ€™t change its plan even though the US withdrew from the agreement.

According to the Foreign Investment Agency (FIA), the project registered by Far Eastern is among five projects with largest registered investment capital licensed in the first eight months of 2017. Unlike three years ago, there have been not many large-scale new FDI projects in the textile & garment sector this year. However, investors are expanding their operating projects. Some Vietnamese enterprises have also stepped up investment. Bao Minh Textile has invested $75 million in a project to make high-quality cloth in Nam Dinh, expected to become operational by March 2018.

According to Vu Duc Giang, chair of Vitas (Vietnam Textile & Apparel Association), the investment capital poured into the textile & garment sector this year has been $2 billion. Though enterprises no longer look forward for the tax cut to zero percent, Vietnam remains a big garment exporter globally. Vietnam textile & garment export turnover in the first seven months of the year reached $17 billion, up by 9.94 per cent over the same period last year.

Vitas, noting that the input material imports increased by 18.76 per cent, valued at $11.1 billion, has predicted that total export turnover in 2017 may exceed the target of $30 billion. According to Vitas, besides TPP, Vietnamâ€™s textile & garment industry still enjoys benefits from other FTAs, including ones with the EU, South Korea and Japan. Vietnam now holds only 3 per cent of the market share in the EU, which means it still has opportunities to boost exports to the market. The Ministry of Industry and Trade has warned that export markets have increased their trade remedies against Vietnamâ€™s products.