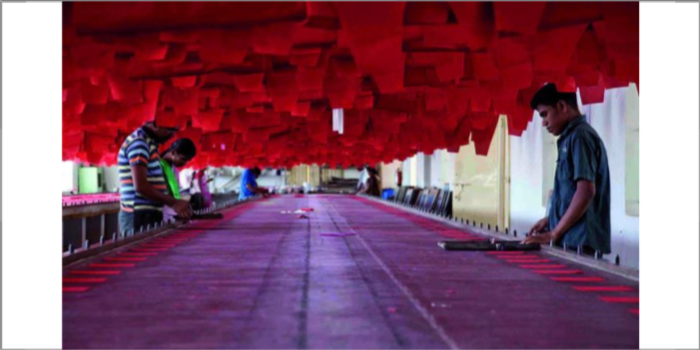 Textiles Ministry to form a structure under PLI: Irani

The Textiles Ministry is bringing to form a structure under which the Production Linked Incentive (PLI) Scheme for technical textiles and manmade fibre (MMF) segment will roll out, Union Cabinet Minister, Smriti Irani said at an ASSOCHAM Foundation Week Programme recently.

The
Textiles Ministry is bringing to form a structure under which the Production
Linked Incentive (PLI) Scheme for technical textiles and manmade fibre (MMF)
segment will roll out, Union Cabinet
Minister, Smriti Irani said at an ASSOCHAM Foundation Week Programme recently.

â€œWe
are currently on the anvil of also bringing to the fore the new Indian textile
policy, the last time India had a textile policy was two decades ago,â€ said Irani,
Minister for Textiles and Women & Child Development while virtually
addressing first session on Day 5 of ASSOCHAM Foundation Week 2020: â€œIndiaâ€™s
resilience: Aatmanirbhar roadmap towards a US$5 trillion economy,â€

Highlighting
the impact of agricultural reforms on Indian industry, Irani said, â€œThe
Government of India in a determined effort has ensured that the MSP operations
undergo with the help of technology and those who participate in the MSP
operation receive direct benefit transfer of their funds in to their bank
accounts.â€

Addressing
the ASSOCHAM event virtually She added, â€œThis means, when we look at the policy
reforms, the idea called Aatmanirbhar Bharat cannot come to a fruition when we
work in silos. So while on one hand the Government of India undertakes agricultural
reforms, on the other hand we leverage technology to provide farm support and
undertake MSP operations.â€

On
the industry impact of engaging with farmers and industry on issues such as
cotton, Irani said, â€œToday if you look at extra-long staple cotton, we
currently produce only four lakh bales, looking at the agricultural reforms, if
the industry conjoins its efforts with farming community and we bring up the
potential growth of production of ELS cotton from four lakh bales to 50 lakh
bales, then the impact on the Indian cotton textiles industry will be such that
we will increase our businesses from the current $18 billion (bn) to $80 bn,
that is the potential that needs to be leveraged and explored.â€

Talking
about agricultural reforms she underlined that when reform takes place in one
segment, its impact is determined across the value chain of Indian economy.

â€œWhen
agricultural reforms came into being, it was a contribution of dialogues and
deliberations that have been undertaken for 19 years across industries,
agriculture sector, farmer organisations and specialists who want to leverage
technology in the field of agriculture so that potential benefit is accrued not
only by farmers but also industry and citizens at large,â€ she said further.

On
India becoming the second largest manufacturer and exporter of personal
protective equipment (PPE), the Union Minister said, â€œWhen Covid-19 pandemic
hit Indian shores, not many across the globe were confident of Indiaâ€™s
response, today as Minister of Textiles I can say that one of the greatest
examples of Indian resilience was given by the Indian textiles industry in the
manufacturing of PPE suits, provision for which was among the consistent
demands of frontline workers and the medical community was across the world.â€

She
said that while the textiles industry was not prepared for, but it rose to this
challenge. â€œIt was an effort which involved almost all ministries and industry
segments in support of Indian textiles industry.â€

Highlighting
the fact how industry giants held hands in support of SMEs in India, she
informed about how a SME apparel manufacturing company wanted to contribute to
the PPE story by reorienting their manufacturing processes and make PPE suits
for medical community so that they could contribute to national cause but
lacked finances for machinery and other equipment and on her request, Anil
Agawal, Executive Chairman – Vedanta Resources Limited came forward to help
them.

â€œSo as we celebrate the fact that today India
has become the second largest manufacturer and exporter of PPEs we celebrate
the true Indian potential to partner with one another in times of crisis,â€ said
Irani.

In
his address, ASSOCHAM senior vice-president, Vineet Agarwal also echoed similar
sentiments and lauded the Minister for being supportive to Indian industry.

Dipali Goenka, CEO and Joint MD,
Welspun
India said, â€œIndia reigns supreme in cotton, handlooms and natural fibres. To
unlock the next wave of growth, we need to focus on MMF and technical
textiles.â€

Goenka added, â€œPost pandemic, global retailers
are diversifying their supply chains and India is strongly positioned to have
major share of such global changes. Textile will play a crucial role for a $5
tn inclusive economy.â€

T Rajkumar, Chairman, Confederation
of Indian Textile Industry (CITI) said, â€œCotton being the main-stay for the Indian
Textile & Clothing Industry since a long time and major foreign exchange
earner for the Indian economy, the Union Minister of Textiles, Smriti
Zubin Irani Ji launched the first-ever cotton brand â€œKasturiâ€ for the Indian
Textile Industry on the occasion of Word Cotton Day celebrated and jointly
organised by Ministry of Textiles and textile trade bodies. Being the largest
cotton-producing country, it was the much-awaited demand of the Indian Textile
Industry that Indian cotton should have its own brand and now with the launch
of Kasturi, Indian cotton stakeholders can hope to get good price realisation
for their cotton products which usually fetch around 10 per cent less realisation
while comparing the same with their counterparts at international markets.

The Central Government has also launched a
Production Linked Incentive Scheme (PLI) to attract diversification, investment
and growth in the Man-Made Fibre (MMF) and Technical Textiles segments and
boost India’s share in these particular segments in the global textiles market.
The scheme will give the much-needed impetus to the Governmentâ€™s initiatives of
â€œMake in Indiaâ€ and â€œAtmanirbhar Bharatâ€. The scheme is extended for 10 key
specific sectors, of which Textile is one of the sectors and has been allocated
Rs 10,683 crore of the total estimated outlay of Rs. 1.46 lakh crore, mainly
for MMF and technical textile segment.â€

In
his address, Anjani Prasad, MD, Archroma
India impressed upon the need for safe to produce and wear products,
efficiently made and provide enhanced value, said, â€œSustainability via safe to
ecology and use of efficient production techniques would lead to enhanced
value.â€

He
urged the minister, to consider reforms like single GST Rate from Raw material
to Fabric, PLI Scheme to apply further, negotiation of Trade agreement with US
and EU to reduce duty on Indian textiles and Labour reforms.