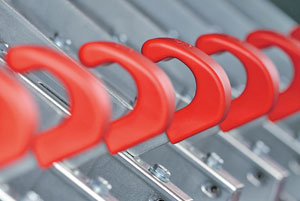 Together with its partners and local agents, Suessen exhibited an array of products at Intertex 2014 and Saigontex 2014 exhibitions.

Since its foundation in 1920, Suessen has been of great value for the spinning industry by an immeasurable amount of innovations and developments with lasting effect and influence on the history of spinning.

Some historic developments are the TwinDisc for OE-Rotor SpinBoxes, the SpinBoxes SE-Series for Autocoro rotor spinning machines SE 7-SE 10, the HP drafting systems for ring spinning and roving machines and the EliTeÂ®Compact spinning system. At Suessen, we feel that we are truly able to differentiate our products from those of the competition. At Indo Intertex 2014 and Saigontex 2014, we want to demonstrated:

We make considerable investments in continuous R&D, combined with applied research that is directly carried out at our customers' mills. This ensures that we are able to further develop our technical and technological components in both an uncompromising and resolute manner. In particular, we focus on universal applicability, improved yarn quality, increased service life, reduced maintenance and proven reliability in industrial application.

The central suction duct is located on top of the ring spinning machine, the vacuum is generated by one motor with filter box. The main advantages are:

Worldwide we have sold over 6.500.000 units EliTeÂ®Compactspindles.

Parts for Autocoro Rotor Spinning Machines. We show the new type of