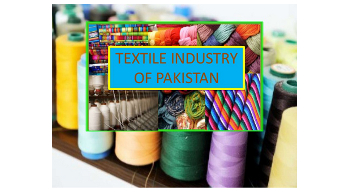 Rising cost of doing business over last several years has not only stalled fresh investment in the textile industry but also hampered the export growth and turn over.

adminOctober 24, 2016 12:00 am 0
Rising cost of doing business over last several years has not only stalled fresh investment in the textile industry but also hampered the export growth and turn over. The government should devise a comprehensive strategy to counter the issue in order to accelerate the industrial pace and also to save livelihood of millions of workers. This was stated by the newly-elected Chairman of Pakistan Textile Exporters Association (PTEA) Mian Ajmal Farooq during an annual general meeting of the Association.
Expressing concern over continuous downfall in country’s exports, he said that Pakistan’s share in the world textile and clothing trade of an estimated $718 billion has plunged to 1.7 per cent from 2.2 per cent less than a decade ago, with regional rivals capturing a greater market share. Bangladesh’s share has increased from 1.9 per cent to 3.3 per cent and India’s went from 3.4 per cent to 4.7 per cent during the same period. He emphasised the unity of textile sector to enforce the government to focus on consolidation and strengthening of economy and uplifting the industrial productivity in the country. He appreciated the successful efforts of outgoing team in resolving the issues confronting exports. He assured that PTEA will continue the efforts for viability of textiles in international market.
Addressing on the occasion, newly-elected vice chairman of the Association Muhammad Naeem assured that no stone will be left unturned for promotion of exports and industry. Exporter’s problems will be taken at all possible levels and efforts will be done to get solved the issues. Later, shields and photo albums were presented to the outgoing chairman. A large number of textile exporters attended the meeting.
CATEGORIES Industry Update
TAGS clothing tradePakistan textiletextile exportsTextile Industrytextile newsworld textile
Share This