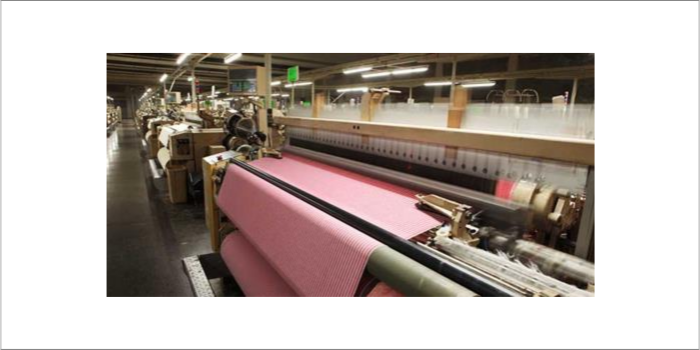 The Indian textile machinery segment is forecasted to grow at a CAGR of 14.02 per cent till 2018. It is expected to reach to $207.5 billion in 2015. The major manufacturers of textile machinery are Germany, Italy, Switzerland, France and now China. China is leading in the field of textile exports today because they installed a large set-up for spinning and weaving industry. One of the major trends in the global textile machinery market is the growing number of technological innovations. The global market is divided into two parts, i.e., low cost manufacturing in developing countries (labour concentrated market) where cheap labour and lower version technology is available and high cost manufacturing in developed countries where labour is expensive and more automation is needed to reduce operation cost.

The main destination for shuttle-less looms in 2019 was Asia and Oceania with 95 per cent of all worldwide deliveries. About 98 per cent, 93 per cent, 86 per cent of all water-jet, air-jet, and rapier/projectile looms went to that region. The main investors were China and India in all three sub-categories. Deliveries of weaving machines to these two countries reached 89 per cent of total deliveries. Bangladesh further played an important role in the rapier/projectile segment with 20 per cent of global shipments.

Rabatex Group, established by family in 1962 started with very basic models of sectional warpers and now with the widened expertise in the domain of textile machinery manufacturing, today we are fully geared up to manufacture and offer the complete range of advanced computerised sectional warping machines, the state of the art single end sample warping and single end sizing machines, specialised warping creels for technical textiles with electronic controls and precision tensioner.

Speaking on the market, Haresh Panchal, Managing Director of Rabatex Group, said, “We are the customer driven company and have adopted the business change with the growing trends in the industry. We have increased our portfolio from basic sectional warpers to the advanced technology meeting the needs of Industry 4.0. We are standing at par in terms of technology and excelling in our professionalism.”

Matteo Schoch, CEO, Schoch Reeds India, said, “Schoch is very well-known name among reed suppliers, as we supply reeds for all type of shuttleless weaving machines. Based on trust of our customers, we are in the process of developing some more related product in weaving accessories.”

He added, “We have a very good market for our core product – reeds. In 2019, our sales growth was +35 per cent and a number of new customers have been added in our folder. We are trying to give best service to our customers so that we can give an added value compared to imported products.”

In the weaving-preparation department, the SAFIR drawing-in machines from Staubli draw warps automatically and in one stroke into the reed, drop wires, and healds. The result is a quickly and completely drawn-in weaving harness with perfectly aligned yarns, which streamlines the downstream weaving process. This high-quality result is made possible by Stäubli’s ingenious Active Warp Control (AWC) system, with standard features such as double-end detection and options such as S-Z detection. For easy start-up of drawing in, SAFIR features Initial Conditions Settings (ICS), options that adapt the machine’s behavior to specific yarn characteristics such as coarseness or hairiness. Besides providing very high drawing-in performance, the broad SAFIR range allows maximum flexibility in terms of application and in the placement of the system within the existing space. It is easy to integrate into the mill because it can be optimally adapted to the material flows.

Once the prepared weaving harness has been linked to the weaving machine, the weaving process, based on the appropriate shed formation, can start. Crucial aspects of this step are downtime, yarn treatment, and especially the speed of the weaving machine, which must be coordinated with all other operating components, such as the shed-formation machinery. Here Stäubli shines again with its S1600/S1700 cam motion series and the dobby range S3000/S3200 versatility in terms of pattern complexity. Continued research and development make the company offer ideally adapted and efficient solutions for continuous weaving – at a low total cost of ownership.

The automation and robotics have helped the textile industry by simplifying complex textile processes and improving speed, quality and cost of textile manufacturing. The textile process machinery have gone through many advance technology like nanotechnology, printing technology such as digital printing, 3D printing, etc.

Along with the increase in apparel consumption and global trade in textiles and apparel, textile machinery shipments have also grown since 2005. Shipments of short staple spindles and open end rotors have shown slow growth at 2 per cent CAGR from 2005 to 2013 while global shipments of texturing spindles had a significant growth at 6 per cent CAGR during the same period. It shows a healthy growth of filament yarn.