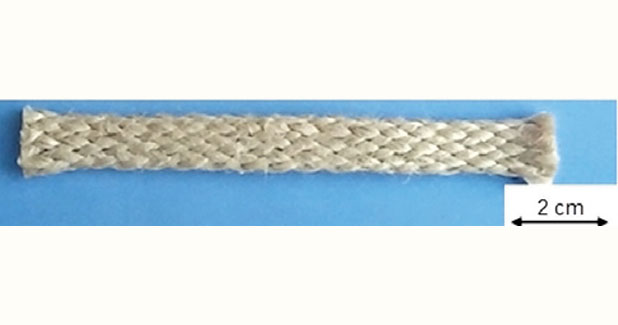 Bio composites (natural fibre reinforced composites, i.e., NFRC) for structural applications have proven their material capabilities on the various levels of aggregation, i.e., the micro (fibres), meso (textile) and macro (part) level. Bio composites are on their way to beat glass-based composites on mechanical performance and least environmental impact. Many promising products have been demonstrated, but mostly for small production volumes in niche markets. Application for medium to large production volumes is to be developed for high production parameters.

The application of glass-fibre reinforced composites (GFRC) is widely used in lightweight construction in various fields of application, for example in the aerospace industry. However, GFRCs still have some serious environmental disadvantages: production of the raw material of the glass fibre in countries with low energy costs (e.g. China) as well as long transport distances of the raw material to Europe. In addition, a lot of energy is required for the production of glass, which is associated with high CO2 emissions. For just one ton of glass fibres, for example, 30 GJ (8300 kWh) are required and 4,800 kg of CO2 are generated [MPB11].

Natural fibres, such as flax fibres, have the potential to replace glass fibres due to their mechanical properties, thus reducing the environmental impact caused by the use of GRP. In particular, the CO2 footprint of natural fibres is much lower than of glass fibres. For the production of one tonne of natural fibres (example: flax, hemp) only five GJ are needed and 800 kg CO2 is generated [MPB11]. The saving compared to glass is therefore 83 per cent. Furthermore, high-quality flax fibres that are suitable for the use in structural components are produced in France, Belgium and the Netherlands, [BS13] while glass fibres are mostly produced in distant countries, especially in China. As a result, the environmental load can be considerably reduced by the shorter transport of the fibres. The use of NFRC can further reduce the environmental impact because NFRCs are suitable for cascade use due to their high self-energy [BS13] and, unlike GFK, do not have to be deposited after their end of use. Rather, waste residues from the production of semi-finished products can be composted as required, since the fibres are a natural product. NFRC products can be melted again when a thermoplastic matrix is used and thus the matrix can be separate from the natural fibre. The natural fibre can be reused in injection mouldings. The thermoplastic matrix can be reused in various applications. Furthermore, in the case of components with a thermoset matrix (also in the case of a thermoplastic matrix), the self-sufficiency can be fully recovered by cascade use. Therefore, an environmentally damaging landfill is not necessary for NFRC.

However, there are still challenges for all advantages: In composite materials, reinforcing fibres must always be aligned in load direction in order to be able to exploit the maximum mechanical properties of the fibres in the composite. This is not a problem with glass fibres, since glass fibres are produced synthetically and are virtually endless. The further processing of glass fibres to fabrics, for example by weaving, can be carried out directly in the following process step. Natural fibres, on the other hand, are basically staple fibres, that is to say fibres having a defined length of 30-100 mm. The prior art is to form these staple fibres into a sliver and to provide sufficient strength for the further processing (e.g. weaving) by applying a twist to the drawn fibre package. However, this twist in the yarn causes the fibres in the composite component to no longer be in load direction. Thus, their strength cannot be fully utilised. Therefore, natural fibres have hitherto only been used in non-structural components with no loads and in non-visible areas, such as, for car inner door panelling.

Main problem for both traditional and bio-based composites is the relatively high cost price of average 30â‚¬/kg as the result of a still labour-intensive manufacturing process. As a consequence, the market for bio-based composites is hardly opened yet, leaving many promising sustainable technologies unexploited. But the market for this new material is growing at a rate of 1,00,000 tonne per year in the industryâ€™s highest-selling NFRC market. In 2005, the NFRC volume in the automotive industry was only 30,000 tonne [KOG+06].

The aim of the project is to reduce the energy consumption of fibre reinforced composite products by 75 per cent at same process costs using the example of a hockey stick. The approach is the elimination of process steps during the spinning process and increasing the level of automation during the preform production. A field hockey stick is manufactured as a demonstrator, which, due to its complex, curved geometry, serves as a platform technology for further applications. The demonstrator is compared with a glass fibre hockey stick. The research will provide knowledge basis for future transfer to applications like windmill blades, pressure vessels or automotive scooters. With the help of this project the industry will be able to produce bio composites for high performance materials.

The novel flax fibre hockey sticks consist of flax braids formed around a foam core, impregnated by a resin under vacuum pressure using an elastic tubular foil. Before braiding the flax fibres are spun to yarn with low/no twist using a special spinning technology. The approach is new and relies heavily on dedicated designed braids.

Wrap Spinning Technology: The special method of the wrap spinning technology is used, in which a winding filament is laid around the drawn sliver of flax fibres. The core remains untwisted and is solidified solely by the winding filament. Afterwards the wrap spun yarn can be braided and resinated with a low-viscosity epoxy resin.

Through this approach it is for the first time possible to use cost-efficient, environmentally-friendly natural fibres as reinforcing fibres in composite materials for structural applications and thus to substitute glass fibres. Natural fibres, which have a limited length, can thereby be further processed by means of conventional surface forming methods and can be introduced into the composite component in a completely aligned manner.

Figure 3 shows a wrap spun yarn with flax fibres in the core and a PA 6.6 filament. The low twist flax roving with the count of 400 tex was purchased at the company Safilin, Sailly-sur-la-Lys, France. The draw ratio was set 0 due to the already very fine roving. The winding filament was wrapped around the roving with 100 windings per metre. The draw-off speed was 20 m/min but can be increased drastically if needed with no yarn breaks occurring.

Braiding process: Net-shaped textile structures, in composite industry known as preforms, can be produced in a radial braiding process. In this process fibres like carbon or glass fibres can be used to over-braid a net-shaped mandrel. This process can be used to produce curved hollow structures for example for car components or sport articles like hockey sticks. Radial braiding is already used in mass production by BMW Group, Munich. Some components of the i- and M-series are integrated in the body using glass and carbon fibres.

The novelty in the frame of this research is the ability to process also bio-based fibres like flax or linen fibres due the innovative process of fibre wrap spinning technology and optimizing the machine set-up.Optimising the process parameters for braiding is determined by two conflicting criteria. The first is by the braiding process in order not to break the yarns; the other resides from the design of the product. As braiding is a highly automated process involving an extensive preparation of the machine, breakage would increase costs for recovering the process. However, first results of braiding of flax fibres are shown.

This result shows the process ability by proper setting the machine. But there are still some broken filaments that will lead to decreased mechanical properties. Therefore, ITA has developed a concept of a bobbin (fibre carrier) that is designed to reduce fibre damage and to set even the fibre tension during the process to adjust it to the curved hockey stick. This will also lead to better fibre distribution on curved areas of the product. The concept of the automated carrier should be patented and, therefore, not discussed in detail here.

For the production of the test specimens the radial braider Herzog RF 144-100/1 is used. Bending and impact behaviour will be analysed. Furthermore, the amount of fibre damage needs to be identified and compared with the damage using of the new design of the bobbin. For this purpose, at least ten bobbins will be built and installed in the machine.