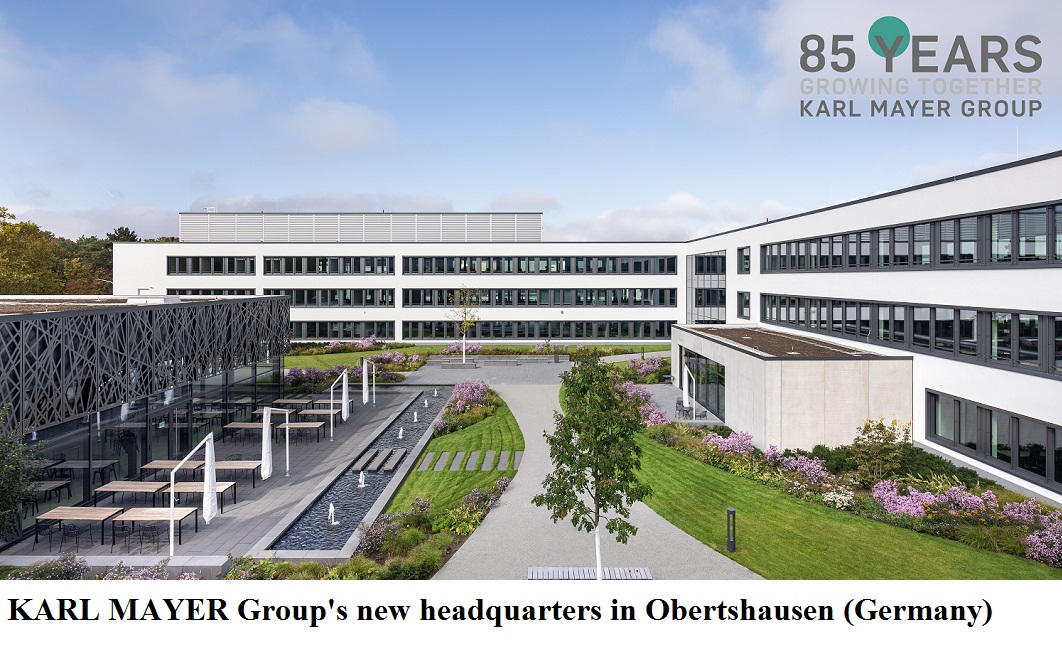 The company is using its 85th anniversary as an opportunity to pay tribute to the people behind its unparalleled success story.

This year, the KARL MAYER Group will be 85 years old. The company is using this anniversary as an opportunity to pay tribute to the people behind its unparalleled success story. Over the years, what was once a family business has developed into an international group of companies at the top of its markets.

The global player owes its current size and position primarily to the right course set by its founder Karl Mayer and his successors. Equally important were the workforce and its cooperation with customers. The Mayer family has also laid down this focus in the corporate guidelines, which the company continues to follow consistently to this day. Fairness and trust are the basis of the KARL MAYER Group’s actions and its fundamental values, and they have just also helped it during the pandemic. Here, in particular, it has been shown how important people and community are.

“Today, we look back on a group of companies with strong roots and business activities in the main sectors of the textile industry. Like this industry, we are globally positioned and therefore close to our customers. Where we are today is thanks to an international team of people with innovative ideas, passion and the courage to set off. We are looking forward to celebrating our anniversary in the spirit of togetherness,” says Arno Gärtner, CEO of the KARL MAYER Group.

A story of growth into a global player

KARL MAYER’s history is also a history of change. The company was founded in 1937 as a mechanical workshop, delivered the first warp knitting machine in 1948, and subsequently expanded internationally. Milestones of continuous growth were the establishment of the first foreign subsidiary in Clifton, USA, in 1956, an early presence in Japan – as early as 1968 – and the establishment of a subsidiary in the main market China in 1995. Today, the Group has additional foreign sites in England, India, Italy, Hong Kong, Bangladesh and Switzerland, and agencies in all parts of the world. The international organisation with production sites in the main markets ensures that the KARL MAYER Group operates extremely close to its customers.

In 2017, the software start-up KM.ON was founded in order to rapidly advance digitization with its own organization through customised software solutions.

The Group also continued to expand in the recent past: in 2020, the flat knitting machine manufacturer STOLL was acquired, and since 2021, the new Beyond Textile Business Unit has been committed to growth outside its traditional business areas in the textile world. Today, the Group offers perfect solutions for warp knitting, flat knitting, technical textiles, warp preparation for weaving, and digitization, and combines the KARL MAYER, STOLL, and KM.ON brands under one roof for this purpose.

A story of innovators and doers with passion

The 3,100 employees from over 20 nations are united by the same DNA and passionate work for a better future. People at all KARL MAYER sites have a shared commitment to developing innovations that advance the textile world, but also areas beyond it. The focus has always been on the customer.

In its anniversary year, the KARL MAYER Group is shining the spotlight on its employees, customers and partners. Under the motto “growing together”, joint projects are presented and insights are given behind the scenes.

Activities include a social media and a press campaign in which customers from all over the world have their say. Many of them can report many years of trusting cooperation. Through working together, personal contacts have grown and shared memories have been created.

In addition to the voices from the market, a new presentation on the group of companies and an anniversary video on the theme of “People, togetherness, insights” will be launched. The anniversary is also the theme of the upcoming trade fair participations. This year, the KARL MAYER Group will be taking part as an exhibitor at Techtextil in Frankfurt am Main and ITM in Istanbul in June, ITMA ASIA in Shanghai in November, and INDIA ITME Noida near Delhi in December.

Last but not least, customers and other interested parties in the industry can look forward to a very special anniversary treat: a new digital platform with specialist news on all the Group’s technologies will go online just in time for the anniversary. The new media format also takes over the information offered by “Kettenwirk-Praxis”. With more topicality and broader reporting, readers are always as up to date as the fast-moving, innovative industry requires.