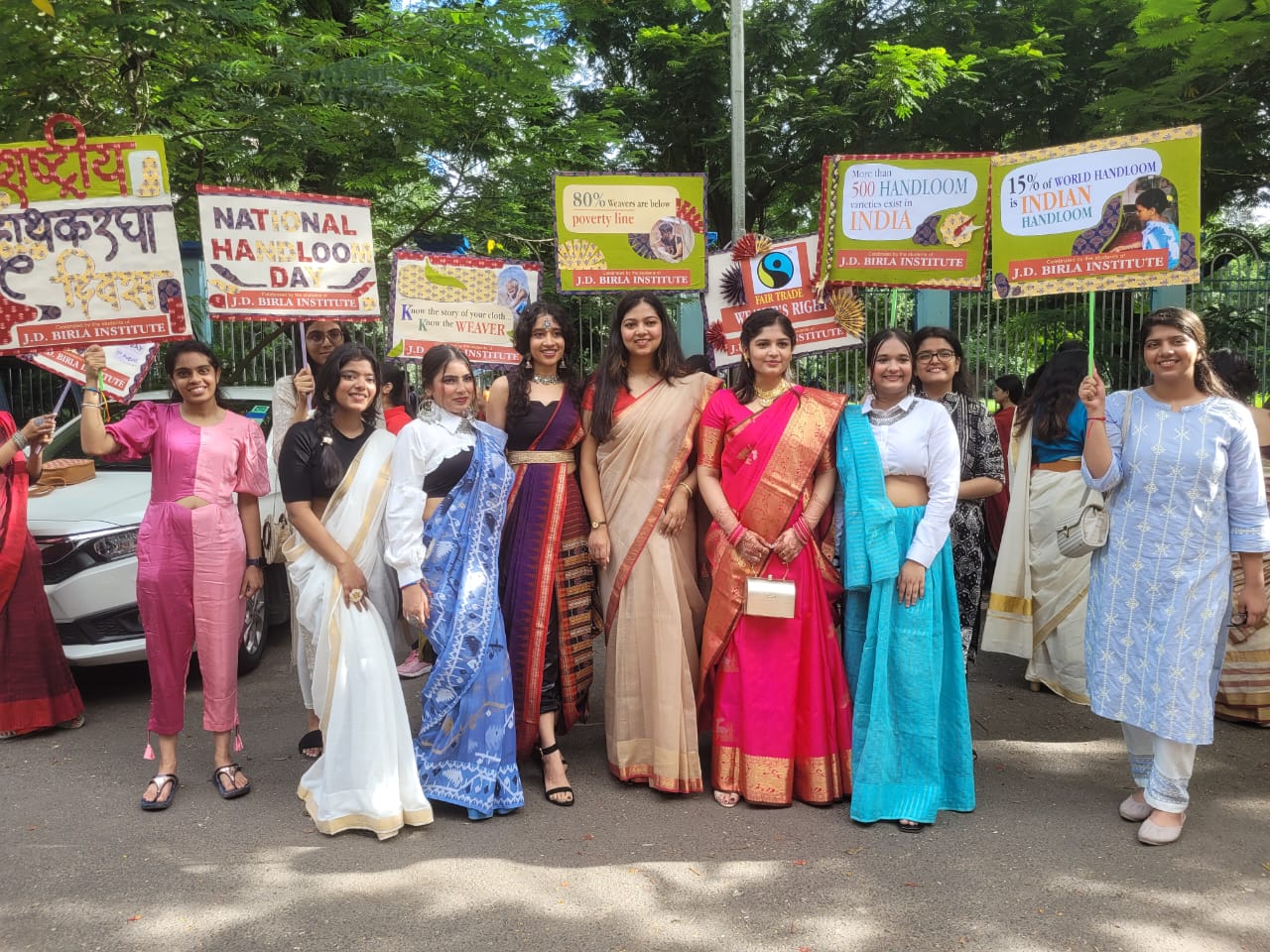 Deepali Singhi shared the significance of handlooms in India and how the students of the Textiles Clothing & Fashion Studies Department of J D Birla Institute, put up a Nukkad Naatak –street play and a fashion show on the occasion of the the National Handloom Day.

India is a nation of contrasts and is endowed with a rich textile legacy. Each region in India, from Kashmir to Kanyakumari produce a wide variety of unique and distinctive fabrics that serve as mediums to record local folklore, traditions and beliefs of their respective regions while carrying their regional identities. It is estimated that India is home to more than 100 such priceless textiles, despite the fact that the precise number of handloom fabrics in this country has never been determined and some have already been lost to time.

Indian handloom products are in high demand across the globe due to the high level of creativity and exquisiteness of the Indian weaves, as well as the distinctive colour combinations made possible by the use of several indigenous natural dyes and their combinations.This is evidenced by the fact that 95% of the world handwoven fabricsare produced in India. The United States, United Kingdom, Germany, Italy, France, Japan, Saudi Arabia, etc are among the major importers of Indian handloom products.At the domestic front, the indigenous Indian handloom industry is the second largest employment provider after agriculture and employs about 5 lakh weavers working on over 23 lakh handlooms. It contributes significantly to both export revenue and the national GDP signifying high returns of a barely viable activity undertaken mostly as a cultural endeavour.

This industry is currently at a crossroad with the rise in popularity of the synthetic mill-made counterparts that can be mass produced in shorter time,are easy to maintain and are less expensive. The preference and inclination of the younger generation today towards fast westernised fashion also poses a challenge to this indigenous industry. To top this,the handloom industry was also badly impacted by the COVID-19 pandemicand the reasons are manifold–(a) unavailability of raw materials due to a ban on public transportation facilities,(b) hefty increase in raw material prices up to an extent of 40% in yarns (hanks) and 30% in dyes, (c) lack of marketing facilities for the finished products due to the closure of internal and external market and (d) financial hardship for weavers brought on by low income, weak savings, and limited access to institutional credit. Despite having a built-in resilience system, the handloom industry has been unable to weather the current economic crisis brought on by this ongoing health disaster, especially with no government assistance available. Therefore, it requires a strong push for revival.

Students of the Textiles Clothing & Fashion Studies Department of J D Birla Institute affiliated to Jadavpur University along with others from the Human Development and Management Departments put up a NukkadNaatak –street play and a fashion show on the occasion of the the National Handloom Dayto draw attention and raise awareness towards the handloom industry in general, and the plight of the Indian weavers in particular. The street play focused on the predicament of handloom weavers in relation to their meagre earnings vis-a-vis the middlemen and the urban shopkeepers. Through the fashion show, students showcased Indian saris in contemporary drape-styles – the Maheshwaris from Indore, Kanchipuram from Tamil Nadu, Banarasi from Banaras, Sambalpuri from Odisha, Tangail from Bengal, Kasauvu from Kerala and many more. A working loom from the college laboratory was also set-up to demonstrate the weaving techniques and students shared important messages through posters and placards. Many early-morning walkers and bystanders at Rabindra Sarobar Lake stopped after their early morning walk to take in this spectacle and innovative event. Some of them also sharedtheir concerns about the Indian handlooms. To go in with the theme of the occasion, students, parents, teachers, and staff from the Institute also donned Indian handloom clothing.

As responsible residents of this wonderful country, it is desired that wemake efforts to promote our heritage and lend support to our weavers.This calls for educating students at all levels about the handlooms and encouraging them to use Indian handloom during festivals and special occasions. There is also a need to create awareness to identify fake and synthetic reproductions. In this digital age, efforts should be made to reach out to the weavers directly so that they derive maximum benefit for all such economic transactions.

Deepali Singhee is Principal with 15 years (since 2006) experience at JD Birla Institute, a reputed Institute affiliated to Jadavpur University and having an “A’ Grade from NAAC, Bangalore.