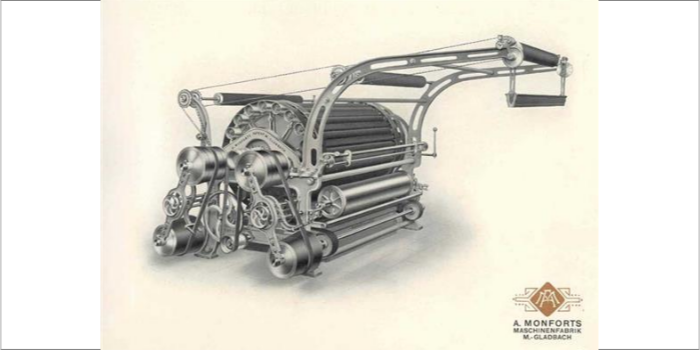 Historic raising machine returns to Monforts after a century

A 36-roller raising machine manufactured in the year 1918 has recently been delivered to its final retirement home â€“ as a historic showpiece at the Monforts Advanced Technology Centre (ATC) in MÃ¶nchengladbach, Germany

A 36-roller raising machine
manufactured in the year 1918 has recently been delivered to its final
retirement home â€“ as a historic showpiece at the Monforts Advanced Technology
Centre (ATC) in MÃ¶nchengladbach, Germany.

The machine remained in
operation at a plant in Poland up until early 2000 and has now been handed back
in full working condition to its manufacturer.

Monforts veterans Walter
Dresen and Fred Vohdahl â€“ both of whom each worked for the company for more
than 50 years and are themselves now retired â€“ ensured the smooth landing of
the machine as it was unloaded from its delivery truck.

The raising machine was
introduced by Monforts at the end of the 19th century and represented a
gamechanger at that time, due to the use of low friction ball bearings for its
raising rollers. This greatly reduced the wear and maintenance of the raising
rollers and was a first for the market.

â€œWe are proud to have such
an old-timer now on display at our ATC,â€ said
Monforts Marketing Manager Nicole Croonenbroek. â€œIt demonstrates the spirit
of innovation that has been a part of Monforts since the company was founded in
1884 and is now in our genes.

â€œOur two former colleagues,
Walter Dresen, our Head of Service for many years, and Fred Vohsdahl, who was
the Manager of the ATC until his recent retirement, took charge of the rebuild
and restoration work. They have been able to find and replace the leather
transmission belts which were the crucial drive element between what would
originally have been a steam engine and the raising machine in the textile
mill.

â€œVisitors will be
interested to see this example of Monforts Industry 1.0 engineering and can
compare it to the latest Industry 4.0 features of our latest finishing lines at
the ATC.â€

Despite any current travel
restrictions, the Monforts Advanced Technology Centre (ATC) is fully
operational for industrial-scale trials which go beyond lab or pilot plant
testing, to be run by highly experienced staff on behalf of customers.

Since its opening in 2013, over â‚¬3 million has been invested in
equipment at the ATC, which over an area of 1,200 square metres, houses two full
finishing lines, engineered to accommodate an extremely diverse range of
processes based around the industry-leading Montex stenter, in addition to a
Thermex range for continuous fabric dyeing and the newly developed CYD process
for yarn dyeing.