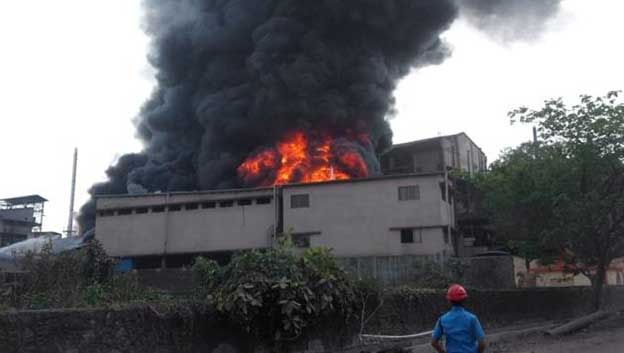 A Tardal-based factory, near the textile town of Ichalkaranji in Kolhapur district, was gutted in a fire.

A Tardal-based factory, near the textile town of Ichalkaranji in Kolhapur district of Maharashtra, was gutted in a fire that erupted on Jan 24 morning. The factory manufactures oils and chemicals required for the sizing of yarn for the textile industry. There has been no loss of life. The authorities were notified late as there were no workers in the factory or even in the nearby textile units as it was their weekly off day. The authorities claim that an electrical short-circuit triggered the fire.

Before the arrival of the fire fighting vehicles, most of the chemicals in the factory unit caught fire. The blaze was so huge that it obstructed the work of the firemen trying to douse the fire. Prasad Sankpal, the district disaster management officer, said that, five fire tenders were used to douse the fire. The process took an hour.

He added that, barring the factory unit, no nearby units have been burnt. There has been no loss of life. The chemicals used in the sizing of the yarn (the process of putting on a protective coating on the yarn to minimise breakage) catch fire immediately. We have asked the local municipal authorities to study the cause and estimate the damage. The factory, Vijeta Chemical Products, manufactured most of the chemicals required by the textile industry. It is located in the Kalappanna Awade Integrated Textile Park at Tardal near Ichalkaranji.