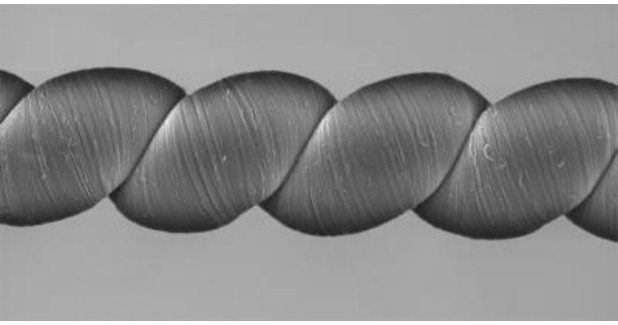 Highly twisted coiled carbon nanotube yarns termed â€œtwistron,â€ generate electricity efficiently. A team of international scientists from the United States, South Korea and China led by researchers at The University of Texas-Dallas (UT Dallas) and Hanyang University, South Korea have reported in a recent Science magazine that these harvester yarns in electrochemical environment can transform mechanical energy to electricity without any external voltage source, in other words without the need of external batteries.

According to Na Li, at Alan G MacDiarmid NanoTech Institute at UT Dallas, who has been involved in the study, yarns charge with the help of electrolyte, without external batteries. Mechanical activities on the highly twisted yarn assembles the charge closer to the yarns, thereby increasing the voltage, helping with harvesting of electricity.

The strength of the new development is that the yarns result in high energy output per cycle. Stretching the yarn 30 timers per second generated 250 watts per kilogram of electric power, stated Professor Ray Baughman of UT Dallas, lead researcher in the study.

Shi Hyeong Kim, a postdoctoral researcher at UT Dallas and with Hanyang University did a bold study to prove the efficiency of the yarns, by experimenting the yarns in the cold waters off the east coast of South Korea. A 10-cm twistron yarn was attached between a balloon and a sinker on the seabed. With ocean waves, the yarn would stretch 25 percent, thereby generating electricity.

The task is to make these high-tech yarns economical and scale-up the production method. May be one day, such high performance textile yarns can harvest energy from ocean waves.