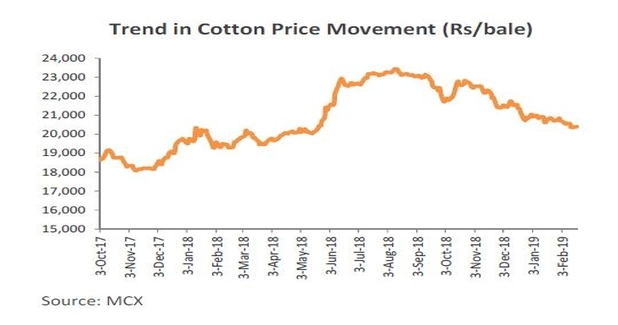 In line with the cotton prices, the cotton yarn prices have also witnessed sluggishness during the period.

Early in February 2019, the Cotton Advisory Board (CAB) revised its cotton output estimate to 330 lakh bales (1 bale = 170 kg) from the previous estimate of 335 lakh bales for cotton season 2019 beginning October 1, 2018 for the third time. This downward revision in production was largely attributed to the water shortage faced by cotton crop in southern states including Telangana, Andhra Pradesh and Karnataka and pink bollworm attack. There are reports that farmers have already uprooted their crop denying a chance for additional pickings. The current yearâ€™s output estimate is lower by about 9.5 per cent y-o-y compared with the output in CS 2018 which stood at 365 lakh bales.

Cotton prices have come off last seasonâ€™s high and are trending lower at Rs 125 per kg for Shankar-6/Shankar-4 and Rs 117.8 for J-34(Sg) on a month on month basis but are still higher y-o-y. Spot prices on the MCX have also softened. Lower prices have been attributed to poor offtake by mills, which have excess yarn stocks, amidst rising arrivals and sluggish exports due to slower demand from China. Further, as indicated by the Cotlook A index, international prices have also softened. However, this decline has negatively affected sentiment as there are reports of Cotton Corporation of India having procured 8.5 lakh bales of cotton compared to 3.6 lakh bales purchased in the similar period last year.

Cotton yarn prices
In line with the cotton prices, the cotton yarn prices have also witnessed sluggishness during the period. Further, China is importing more cotton and less yarn from India given the duty differential between the two. Indian yarn exports to China have come down from a high of 55.8 thousand tonnes in June to just 32.6 thousand tonnes in September 2018.