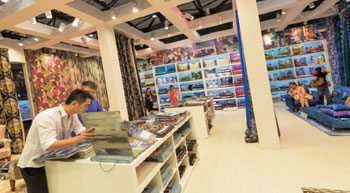 As the countdown to Augustâ€™s Intertextile Shanghai Home Textiles â€“ Autumn Edition continues, recent economic data out of China suggests cause for optimism in the domestic home textiles market.

As the countdown to Augustâ€™s Intertextile Shanghai Home Textiles â€“ Autumn Edition continues, recent economic data out of China suggests cause for optimism in the domestic home textiles market. While Chinaâ€™s overall economy is growing at a slower pace, with 2015 GDP growth at 6.9 per cent, the home textiles market is in better shape. According to a report by the China Home Textile Association (CHTA), sales figures from some of Chinaâ€™s most important home textile sourcing markets grew strongly between January and September 2015. Haining China Home Textile City, a decorative fabric market, Dieshiqiao Home Textile Market for bedding products, as well as Gaoyang Commerce City for towelling recorded sales increases of 40 per cent, 9.5 per cent and 4.5 per cent, respectively, during this period.

In order to assist exhibitors to take advantage of these strong market conditions, the Autumn Edition of Intertextile Shanghai Home Textiles will be extended from 3-4 days. Held from August 24-27, the fair will occupy six halls of the National Exhibition and Convention Centre (Shanghai). Compared to a single hall for overseas exhibitors in 2015, this year international exhibitors and overseas country pavilions will showcase their latest collections in hall 4.1, while domestic and overseas exhibitors featuring products within the whole-home style concept, as well as editors, will be located in hall 5.1.

Held alongside this fair are four other textile events. These include Intertextile Shanghai Apparel Fabrics â€“ Spring Edition, Yarn Expo Spring, PH Value and CHIC, and together these five fairs create an unrivalled platform in the textile industry to meet potential buyers.