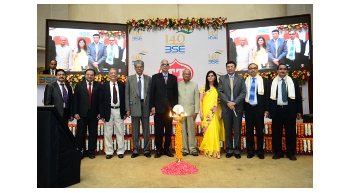 T T Ltd., one of the leading textile players in India, celebrated the completion of 25 years of public listing by ringing the Silver Bell in Bombay Stock Exchange (BSE). The glittering function hosted by Chairman-Founder Dr RC Jain was presided by Padma Bhushan awardee DR Mehta (ex-SEBI Chairman) in the International Convention Centre of BSE in Mumbai.

T T Ltd., one of the leading textile players in India, celebrated the completion of 25 years of public listing by ringing the Silver Bell in Bombay Stock Exchange (BSE). The glittering function hosted by Chairman-Founder Dr RC Jain was presided by Padma Bhushan awardee DR Mehta (ex-SEBI Chairman) in the International Convention Centre of BSE in Mumbai.

The companyâ€™s management announced their plans to launch a premium innerwear brand in the near future as part of their new strategy to move towards the fashion side of the fibre to fashion spectrum. This move will help enhance margins and build the brand equity of the company. The company has enhanced their knitwear range to become a garment company from an innerwear company.

Dr RC Jain explained the journey of the company and its evolution as a fibre to fashion company as it spread its wings not only across India but also across 65 countries. Brand T T has become a well known brand with registrations in India and many other nations. He paid special emphasis on the principles of the company and its employees who have been the two important pillars on which the company laid its foundation and grew. He humbly accepted that, â€œI wasnâ€™t self made as said by many, but was made by all the people who walked with me over the long journey spanning almost 50 years.â€ He also dispelled the belief that T T was a family managed company, and said that it was as professional as any other company if not more. It has the distinction of having three IIM graduates on its board, one IIT Professor, three qualified professionals and a NIFTian. He also shared his three inspirations â€“ Father of Nation Mahatma Gandhi, Saint Kabir and Poet Thiruvallur.

Sanjay Jain laid down the vision and roadmap of the company with clarity and crispness. He exuded confidence and commitment to take the company to new heights. He said, â€œBoth, the company and the Indian textile industry was at a very important threshold from where we would see both coming out with open wings like a butterfly comes out from its cocoon to dazzle the world with new colors and life.â€

Sanjay Jain felt opportunities for the company were enormous and the only limiting factor would be human resources. He further said that, â€œGoing forward the company would focus on value addition and brand building to create a strong portfolio of product lines to address the need of the middle class people of India. Value for money which has been an important principle of the company would continue to stay so in the years to come. Volume growth and occupying market space would be given special focus to ensure it reaches out to the heart of India.â€

He added, â€œT T Ltd plans to be a 50:50 company in terms of exports and domestic sales. Hence, going forward, focus is going to be on more value added garments business, brand building and focusing on the domestic market, which is the fastest growing opportunity for us. Our network in rural and semi urban markets is expected to pay rich dividends to us. I would like to highlight our growing business in China â€“ we see our cotton based textiles business growing rapidly. Vietnam, Ethiopia and the US also provide interesting opportunities. We shall make structural and organisational changes to target higher growth rates of 20-25 per cent per annum.â€

T T Ltd has to its credit many firsts in the industry, one of which is that it was the first garment company to get listed on a stock exchange in 1990.

Emphasis over time would shift down the line, i.e., away from fibre and closer to fashion to reduce the beta of the company fortunes and ensure more stability. While it would not close its eyes to exports ever, however it would lay more emphasis on domestic market (hope to move to a 50:50 ratio).

The function ended with the â€œRinging of the Sliver Bellâ€ which in words of the Jyoti Jain, â€œThis ceremony doesnâ€™t mark the completion of 25 years, but the beginning of its journey to a Golden Horizon, i.e., Golden Bell.â€

Last but not the least, the company is fully conscious of its responsibility to society and its CSR spending has always been much above the recent norms set by statute. It reaffirmed its commitment to reach out to society in field of education, health and sports, etc. directly and through its Groupâ€™s Charitable Trust.