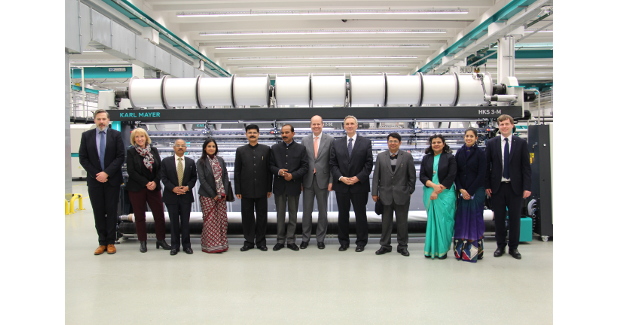 On February 9, 2018, KARL MAYER welcomed the Indian Minister of State for Textiles, Ajay Tamta, at its Development Center in Obertshausen. The government representative was accompanied by Anant Kumar Singh, Secretary Government of India, Ministry of Textiles, and by other delegates from the Ministry and Consulate General.

On February 9, 2018, KARL MAYER welcomed the Indian Minister of State for Textiles, Ajay Tamta, at its Development Center in Obertshausen. The government representative was accompanied by Anant Kumar Singh, Secretary Government of India, Ministry of Textiles, and by other delegates from the Ministry and Consulate General.

The Minister took the opportunity of a business trip to Germany to learn more about the products and the manufacture of one of the most important textile machinery builders of the knitwear industry with successful business activities in India.

KARL MAYER has been working with Indian textile companies for many years. â€œIndia is an important market for usâ€, explained Dr Helmut PreÃŸl, KARL MAYERâ€™s CFO, when he welcomed the guests. In 2014, KARL MAYER opened its own plant in Ahmedabad, and started its own value creation in the Indian market. Today, KARL MAYER with roughly 80 highly qualified staff members and with its longstanding, experienced regional agent A.T.E. is successfully operating on site. For its business planning until 2023, the enterprise expects a continuing, above-average growth rate. The desired success should especially be ensured by new technologies, which do not only support improvements in productivity but also the change of the textile industry to sustainability.

All these new and innovative aspects could be shown to the government delegation during a presentation of machines and end-uses at KARL MAYERâ€™s headquarters. The visitors were impressed by the high output of the machines and by the top quality of the fabrics. Some of the highlights were, among other things, solutions for sustainability such as the LOW ENERGY OPTION (LEO), which ensures significant energy savings during machine operation, and the innovative sizing machine PROSIZE, which requires considerably less sizing agent than conventional equivalent types. But KARL MAYER does not only offer innovative machines but also textile developments ensuring success on the market. The innovative textiles, for example elastic and rigid lingery articles or fabrics for activewear and clothing, can be produced on the KARL MAYER machines in a most efficient way and in wide-ranging designs.

The secret behind this unique performance could be shown to the guests on a tour of the new assembly hall that was set up in 2017. Learning from each other and cooperating with each other are important factors for the upcoming Indian textile and clothing industry, this was the unanimous opinion during the final discussion. KARL MAYER as world market leader is a strong partner in this respect.