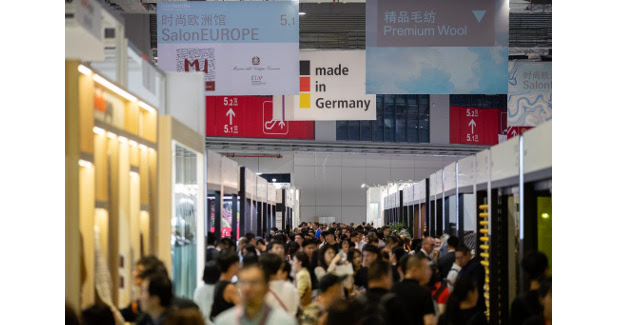 15% rise in visitors for Intertextile Apparel

From its debut of 123 exhibitors in 1995, to more than 4,400 at this yearâ€™s Autumn Edition: Intertextile Shanghai Apparel Fabrics has grown exponentially in the last quarter of a century.

From its debut of 123 exhibitors in 1995, to more than 4,400 at this yearâ€™s Autumn Edition: Intertextile Shanghai Apparel Fabrics has grown exponentially in the last quarter of a century. The fairâ€™s 25th anniversary celebrations represented a trading platform that has become highly regarded as the best place to find business in China, as well as an ideal platform to meet global partners. With 89,662 visitors from over 120 countries & regions and a wide range of markets (a 15 per cent increase from 2018, which featured 78,131 from 103 countries and regions) there is always potential to be found at Intertextile.

â€œChina remains a huge part of many exhibitorsâ€™ global market strategy, of course in part because of the large domestic purchasing power, but also because much of global fashion has business in Chinaâ€™s advanced manufacturing industry,â€ commented Ms Wendy Wen, Senior General Manager of Messe Frankfurt (HK) Ltd. â€œThe key to business in China is interaction, face-to-face, especially with textiles that should be seen and felt up close. 25 years of experience have made this a trusted platform, for both exhibitors and trade buyers in China, to trade textiles. This is how Intertextile welcomes loyal exhibitors back each year, while also including plenty of new options at each edition.â€

About 4,422 exhibitors from 33 countries & regions (2018: 4,480 exhibitors from 33 countries & regions) exhibited at the show, including some who have participated for 10 to 20 years in a row and were recognised at a gala dinner on 25 September. High quality trade buyers praised the comprehensive nature of Intertextileâ€™s product range, as the fair was recognised as a one-stop shop for apparel products across the board. Product zones, such as Functional Lab and Beyond Denim, also offered an easier way to quickly match exhibitors with their target buyers.

â€œThanks to the fairâ€™s positive reputation within the industry, exhibitors use Intertextile as a platform to reveal their latest collections, meaning that visitors can be the first to see and feel innovation,â€ continued Ms Wen. â€œThis in turn attracts more visitors from all over the world â€“ at this edition; we welcomed trade buyers from even more countries & regions. So no matter what problems one market or economy may endure at the time, Intertextileâ€™s diverse network of suppliers and buyers ensure that business can always be found at the fair.â€