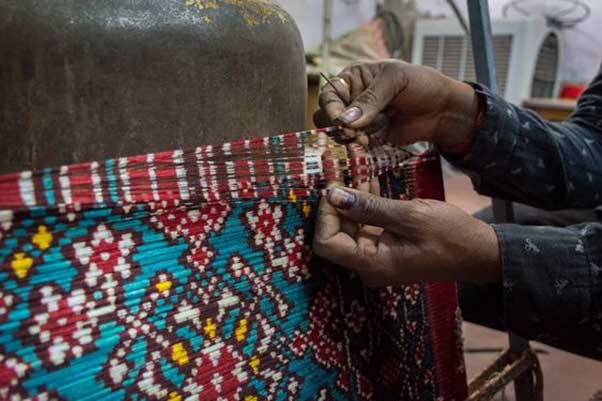 It identifies factors contributing to their declining popularity and offers solutions for their preservation.

A list of 50 unique and distinctive national textile crafts was published by UNESCO. Some of the textiles that made the cut included Sungadi and Toda needlework from Tamil Nadu, Himroo weaves from Hyderabad, and Bandha tie-dye weaving from Sambalpur in Odisha.

The histories and folklore associated with the textiles are outlined in Handmade for the 21st Century: Safeguarding Traditional Indian Textile, along with information on how they are made, the reasons why they are becoming less and less popular, and preservation techniques.

Lack of appropriate inventory and recording, according to UNESCO, is one of the main obstacles to the preservation of intangible cultural heritage in South Asia. The book, which tries to close this gap, compiles years of investigation into the 50 chosen textiles.

Khes from Panipat, Chamba rumals from Himachal Pradesh, Thigma or wool tie and dye from Ladakh, and Awadh Jamdani from Varanasi are a few of the famous handcrafted textiles from north India that have been documented.

Ilkal and Lambadi or Banjara needlework from Karnataka, Sikalnayakanpet Kalamkari from Thanjavur, and other southern textiles have been added.

The list of 50 famous textiles also includes Kunbi weaves from Goa, Mashru weaves and Patola from Gujarat, Himroo from Maharashtra, and Garad-Koirial from West Bengal.

While announcing the publication, Eric Falt, UNESCO New Delhi Director, said, “Textile crafts represent a very significant share of the Indian cultural heritage and have dazzled the world for centuries. Despite the pressures of industrial mass production and competition from new countries, it is essential that these iconic heritage crafts are taken stock of and promoted as contemporary treasures.”

“It is my hope that India will consider expanding its register of elements inscribed in the UNESCO Representative List of the Intangible Cultural Heritage of Humanity by nominating one of the textile crafts featured in this publication. No textile practices from India have been included in the list so far and an inscription in the list would be due recognition of the talent and diversity of the country’s extraordinary weaving traditions,” Falt concluded.

The UNESCO publication offers recommendations for the protection and revival of various textile crafts, covering a broad range of concerns ranging from policy to grassroots micro-interventions. It also serves as a sample of endangered textile crafts.