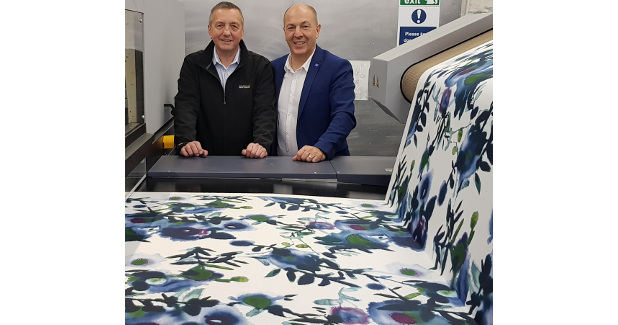 Durst, manufacturer of advanced digital production technologies, and Standfast & Barracks have announced plans for a centre of excellence in the UK at the fabric printing companyâ€™s UK headquarters in Lancashire.

Durst, manufacturer of advanced digital production technologies, and Standfast & Barracks have announced plans for a centre of excellence in the UK at the fabric printing companyâ€™s UK headquarters in Lancashire.

Little more than two years after a devastating flood that closed the factory for more than four months, Standfast & Barracks has cemented its partnership with Durst with an investment in its new print and ink technology. The fabric printing company has installed two Alpha 190 systems, part of a new generation of super high-performance multi-pass printers with the One-Step Pigment Ink Greentex P.

These, together with the creation of a Centre of Excellence, will continue to drive digital textile growth for Standfast & Barracks, which has already returned to similar business levels since before the flood.

Details of the Centre of Excellence were being unveiled in the run-up to Heimtextil in Frankfurt Messe, Germany, from 9-12 January where Durst and Standfast & Barracks both have an important presence. Heimtextil, which is held in Frankfurt am Main, is the worldâ€™s biggest international trade fair for home and contract textiles.

During Heimtextil, Durst will be giving a keynote presentation at the WTiN conference on 10 January at 15.30. It is entitled â€œSuccessful Digital Business Models and Opportunities with the new Durst Alpha Series and the Greentex P Pigment Inkâ€.

Standfast & Barracks, a well-established Lancaster-based fabric printing company, is part of the British luxury furnishings group Walter Greenbank PLC. With a heritage approaching almost 100 years, Standfast & Barracks has an international reputation for its commitment to quality and innovation and for using advanced technologies.

Stephen Thomas, Managing Director of Standfast & Barracks, said: â€œOur investment in Durstâ€™s digital technology has transformed the market dynamics for our business and helped trigger a new wave of innovation. Most of our collections on display at Heimtextil were printed using Durst technology â€“ itâ€™s brilliant.â€

Mr Thomas added: â€œThe initial trials for the pigment inks have been extremely successful and we are looking forward to driving forward this planned Centre of Excellence. Digital is by far our biggest growth area. Thanks to the huge advances in our digital fabric printing capabilities with Durst, we are now expanding into further industrial production for our premium quality products. Digital gives us unlimited opportunities and colour variations. This is another huge step forward for our business.â€

Martin Winkler, Segment Manager Durst Textile Printing, said: â€œStandfast & Barracks is incredibly proud of its rich heritage and, through Durstâ€™s digital technology, it is showing the company is capable of even bigger and better things. It is a perfect example of how a respected company is pushing the barriers and innovation in textiles by investing in new technologies.â€