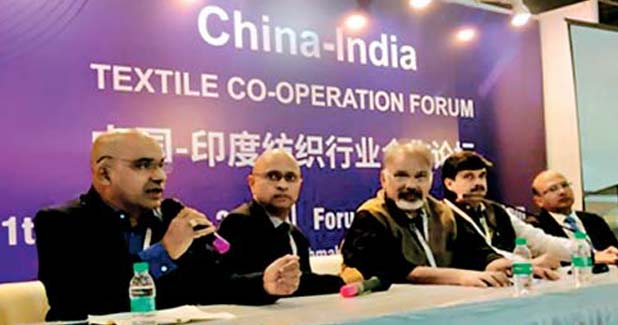 adminJanuary 1, 2020 12:00 am 0
India China Textile Co-operation Forum was organised on December 11, 2019 at Matchmaking Lounge of Bombay Exhibition Center, Mumbai. The forum began with Arvind Sinha, Ex-president of Textile Association of India who set the tone with his speech talking about merits of collaborative approach between India and China. He also mentioned China has come a big way as far as textile and apparel industry is concerned taking largest pie of the industry as far as total trade is concerned and this growth is phenomenon which has happened in past three decades. Gradually they have increased their stake and reached to this stage.
Avinash Mayekar, MD & CEO of Suvin Advisors, while speaking on his topic â€˜Possibilities of joint collaborations, importers of textile machines, dyes stuffs and fabric from Chinaâ€™, said that we Indians have to accept China as a â€œbig brotherâ€. He also stressed on the point that there is no culture of dedication and commitments towards work in Indian textile industry hence we lack in efficiencies. He said, â€œWe need to have collaborative approach in between two countries to achieve common goals.â€
Mayekar stressed upon further stating that India has its large strength of processing cotton based products in the international market hence India can supply cotton based technical textiles, hand loom products, grey fabrics to China. Similarly, China can supply high quality garments back to India. China also excels in digital printing and machinery manufacturing as well as creating huge scale of economy and appropriate large size infrastructure. There can be arrangements of such bilateral trade in between the two countries.
As far as machinery sale is concerned, both the countries have good scope for various machines for e.g. China is very strong in sewing, embroidery, digital printing and weaving machines along with some wet processing machines whereas India is strong in spinning machines and some processing machines. Mayekar also said that both countries should understand their strengths and weaknesses and accept whatever is required to benefit both countries.
Manish Daga, who owns brand Cotton Guru, informed about the importance of cultivation of clean cotton, what things needs to be done and how India is progressing in this particular field and both the countries have opportunity to close on the entire world.
The panel discussion on the topic â€˜Importance of Indo-China Textile Co-operationsâ€™ included panelist like Avinash Mayekar; Subhash Bhargav, Chairman & Managing Director, Colorant; Manish Dagga and Hemant Sonare, Group Director for Wanjari Group of Institutes, along with Arvind Sinha as the moderator.
According to Daga, China is exporting thousands of items to world and India whereas India exports very few items to China. Being similar climatic conditions and crops to grow are also similar, but China has capitalised on the economics of strain and also on research, development and value addition. India needs to learn this from China. India has benefit of availability of raw material, skill sets and low labour cost. India and China should join hands together with their strengths.
Bhargav said that India and China altogether is having one-third of worldâ€™s population. Chinaâ€™s economy development is in two digits for last so many years whereas Indiaâ€™s economy is developing with single digit. Also chemical market is progressive in India and Indians are very good in having quality of effluent treatment plant manufactured, control and disposal of dyes and chemicals. He further added China as well as India are facing social and environmental issues and hence both countries can come together to sort the issues.
Sonare was impressed that discussion was on cooperation instead of comparison between India and China. India has strength of cotton based products and complete value addition can be done in India. He further added if quality from India and quantity form China collaborates, these two countries will be driver of world economy.
Sinha told that the China is having huge manufacturing capacities which are running at 45 to 50 per cent only. If utilisation increases by 7 to 10 per cent, half of world production will stop.
CATEGORIES Trade Fair
TAGS Avinash MayekarCotton GuruIndia China Textile Co Operation ForumSubhash BhargavWanjari Group of Institutes
Share This