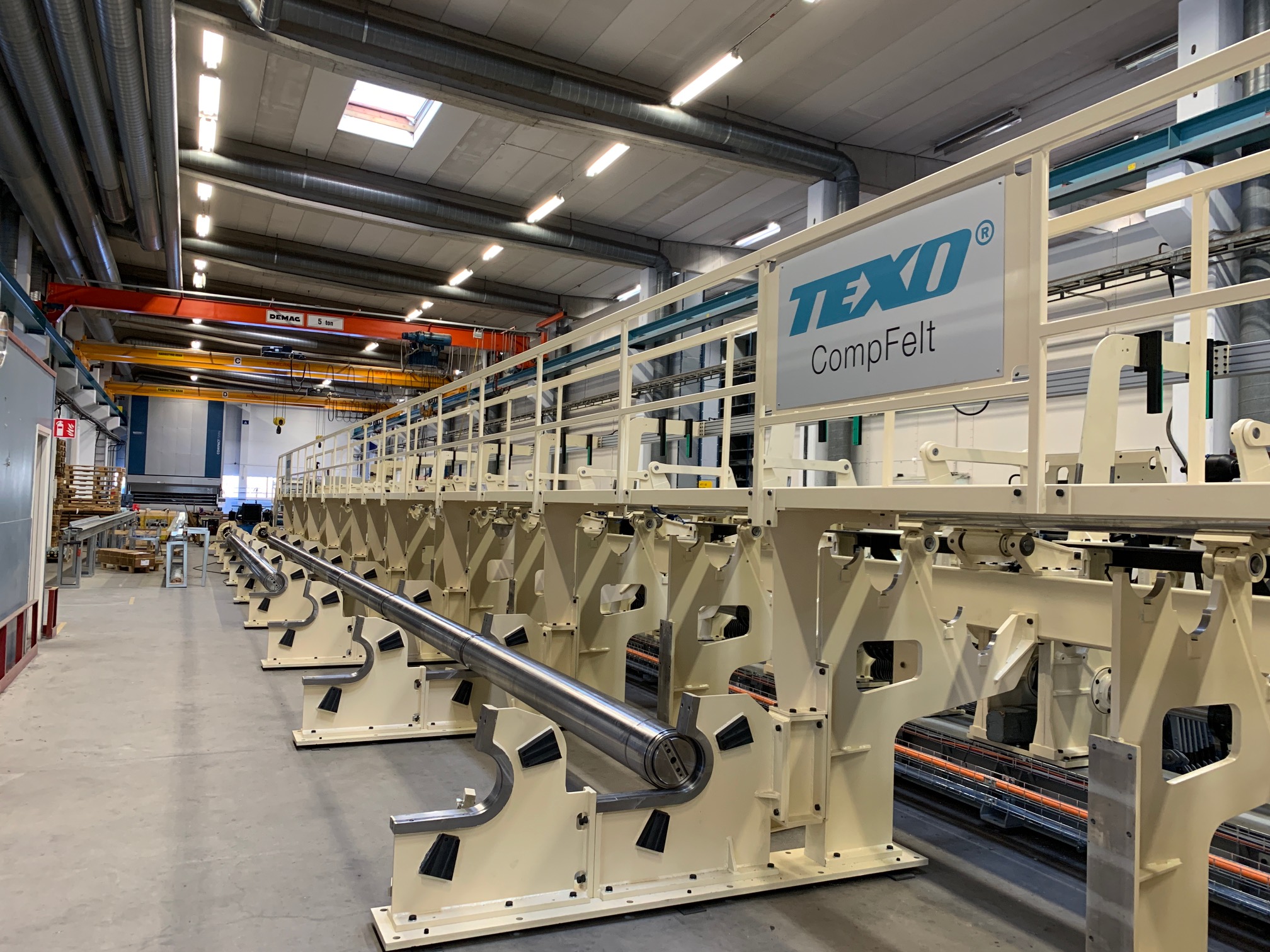 The demand for Compfelt weaving looms comes from the suppliers of paper machine clothing (PMC) to paper mills, who in turn operate colossal machines for paper manufacturing.

Currently, there is a surge in demand for the company’s Compfelt weaving looms for press felt base fabrics, according to TEXO AB, a member of TMAS (the Textile Machinery Association of Sweden).

“These are far from standard machines. Off-the-shelf industrial weaving machines generally range in their working widths from 1.9 to 3.2 metres, with those purpose-built for technical applications such as geotextiles extending to wider widths of six metres and beyond. Meanwhile, one of the machines we have recently successfully delivered and commissioned has a working width of 23 metres and is not even the widest of the many such machines the company has engineered and delivered worldwide since its formation,” explained Anders Svensson, President, TEXO.

A second recently-delivered line has a more modest working width – in relative terms – of 13 metres.

The demand for such machines comes from the suppliers of paper machine clothing (PMC) to paper mills, who in turn operate colossal machines for paper manufacturing.

The largest paper making machine is currently believed to be located on Hainan Island off the southern coast of China and is 428 metres long – roughly the length of four football pitches.

Naturally, such machines require equally large-scale components, which is where TEXO comes in.

All paper machines require a regular supply of PMC fabrics which are employed in three separate areas of the paper machine – the forming section, the press section and the drying section.

TEXO Compfelt weaving machines are specifically employed for the production of endless (tubular) woven base fabrics for the press section of paper machines, where water is mechanically removed from the newly formed sheet of fibres. In the simplest press, the sheet is carried by the PMC fabric between two rolls, where water is squeezed out by the application of load and pressure. This can also be assisted by the use of vacuum and heat. The PMC fabrics here need to be replaced regularly, with a maximum lifespan of six months.

Press felts have become increasingly sophisticated over the years, consisting of complex woven base structures which are subsequently combined with nonwovens via needle-punching on equally huge machines. The woven base fabrics are primarily made from polyamide for its strength and hygroscopic and elastic properties.

“An endless woven fabric produced on the 23-metre-wide machine we have just delivered makes endless fabric belts of 46 metres,” Svensson explained. The machine can be adjusted step-wise to create smaller belts as required, which also increases the production speed and product quality. These looms operate at between 30 to 55 picks per minute with shuttles that are almost a metre long. They have a maximum warp tension of 1,500 kilograms per metre and a maximum beat-up tension of 3,000 kilograms per metre.

“A major refinement of the machine has been the ability to equip it with up to 24 dobby harness frames to meet the demand for sophisticated structures from the PMC manufacturers. Although the PMC business represents a small proportion of the total cost of manufacturing paper, it can have a significant impact on the quality of the paper, the efficiency of a machine and machine production rates,” said Svensson.

Another significant development has been that of a self-supporting base pre-filled with concrete, which has eliminated the need to dig out foundations in a plant to support the machine.

“This makes the machine very solid and stable and allows it to be relocated if that is ever required, but it does give it an overall weight of around 120 tons,” Svensson said.

TEXO’s looms are built to last, but technology moves forward, and the company is also currently very active in the retrofitting of existing machines built as far back as the 1970s.

“The mechanical engineering of the 1970s, 80s and 90s was perhaps a little too good,” said Svensson. “The machines out in the market are rigid and strong and we are still supporting many of them with mechanical spare parts. They can, however, also be equipped with the latest technology for automation. With new controls, drives and motors they can perform as well as the latest machines.”

TEXO has also just integrated its offices and production centre at its base in Älmhult, Sweden, to create a unified 5,000 square metre site.

“This is a big step forward for efficiency and cooperation between our engineers and production workforce and is already resulting in enhanced team work and savings for us,” Svensson said in conclusion. “The new office is built with an open Scandinavian design and has all of the latest technologies required for a sustainable and environmentally-friendly work place, including a solar panelled roof. We are expecting a busy year.”

“TEXO is a company that is now benefiting from both the increased e-commerce trend and the move towards sustainable packaging solutions, as well as with its traditional and well-proven technology foundations,” added Therese Premler-Andersson, Secretary General, TMAS. “Paper is replacing plastic in many areas, and we see new as well as retrofit investments in many places. The ability to upgrade textile machinery to the latest technology using controls and drives is something I expect to see a lot more of. Swedish machinery has a proven history of quality, lasting for many years, so this is a winning concept when looking for cost-efficient and sustainable solutions in many different end-use sectors.”