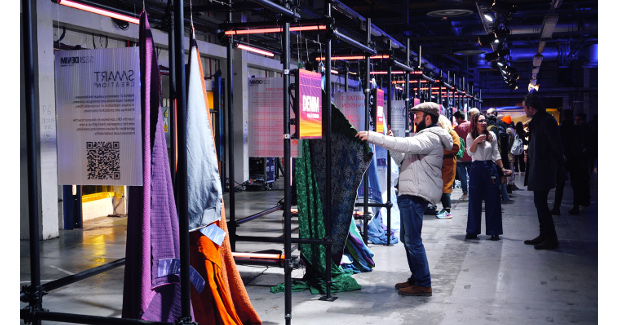 In the latest short film released on the Monforts YouTube Channel â€“ captured at the recent Denim PremiÃ¨re Vision show in London â€“ some of the leading global manufacturers discuss their initiatives for more sustainable denim production.

In the latest short film released on the Monforts YouTube Channel â€“ captured at the recent Denim PremiÃ¨re Vision show in London â€“ some of the leading global manufacturers discuss their initiatives for more sustainable denim production.

Cone Denim, based in Greensboro, North Carolina, for example, can lay claim to having put in place its first environmental control measures back in the 1940s when the company first started recycling its water.

â€œIt was a method of efficiency even back then, eighty years ago,â€ says Gabriel Magopat, of the companyâ€™s UK customer service centre, â€œbut  producing high quality products is another method of being sustainable and of being efficient, and I think thatâ€™s what Cone stands for. We have an amazing history.â€

Cone Denim is known for its signature S GeneÂ® stretch denims which have traditionally incorporated polyester components to provide the stretch. It has now partnered with Intrinsic Advanced Materials of Gastonia, also in North Carolina, to introduce patent-pending CiCLO stretch polyester fibres into its denim collections.

While still being synthetic based, CiCLO polyester is able to biodegrade in marine environments, wastewater treatment plants and landfill conditions, at rates similar to natural fibres like wool.

This more sustainable solution for stretch is also being introduced to China for the first time by another leading denim supplier, Advance Denim.

â€œAdvance Denim is spending its resources on being the most technologically advanced company in China, and also the most sustainable,â€ says Mark Ix, the companyâ€™s Director ofMarketing. â€œWe are investing heavily in our manufacturing to save both water and chemicals to create cleaner products.â€

Monforts denim customerBerto is a family-owned company with its main denim mill in Bovolenta, a small rural town near to Padua in the north east of Italy, where respect for the environment has always been a must.

â€œThe family has always been focused on respect for the environment,â€ says Bertoâ€™s Marketing Manager Francesca Palento. â€œIn particular, we have a river next to the company from which we take our water for production and we then return it cleaner than it was before. We are also now producing GOTS and Global Recycling Standard jean produced with yarns made from our own internal waste production.â€

Pakistanâ€™s Soorty has recently received Cradle to Cradle Gold certification â€“ the most stringent and exacting sustainable standard currently in existence â€“ for its Pure D range of denims. These are produced using the companyâ€™s proprietary Zero Waste Water dyeing technology, in combination with the most advanced Monforts finishing machines.

â€œOur very latest collection is called Climate Jeans, because every single product we now produce draws attention to the climate emergency we are living through right now,â€ says Eda Dikman, Soortyâ€™s Marketing Communications Manager. â€œSustainability is very important to us because we produce at scale and all of the actions we take reflect on the planet.â€