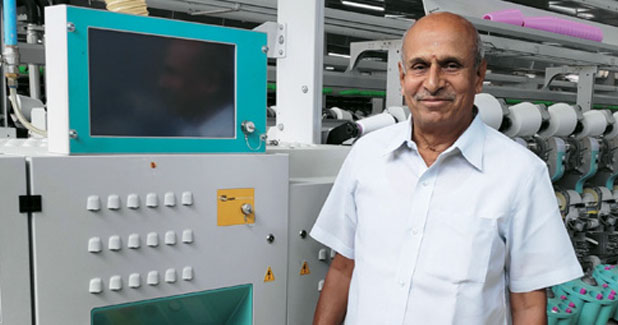 Under KM Thiruvenkatasubramaniamâ€™s dynamic leadership, Saravana Polythreadsâ€™ mill expanded to 8,000 spindles in 2007; today it has 26,000 spindles.

Under KM Thiruvenkatasubramaniamâ€™s dynamic leadership, Saravana Polythreadsâ€™ mill expanded to 8,000 spindles in 2007; today it has 26,000 spindles.

At the age of 70, KM Thiruvenkatasubramaniam, Executive Director of Saravana Polythreads, is still very active in the day-to-day activities of the mill. With conviction and zeal he pursues the goals he has set for the company. Saravana Polythreads, Erode, Tamil Nadu, was founded by Thiruvenkatasubramaniam in the year 2000 with 3,000 spindles. Under his dynamic leadership, the mill expanded to 8,000 spindles in 2007; today it has 26,000 spindles. The mill spins Ne 54â€™s, 63â€™s and 72â€™s polyester counts and majority of its production is supplied to Madura Coats.


Thiruvenkatasubramaniam is well versed with the latest technologies and he is particularly interested in energy saving technologies. The mill has its own wind mill and solar panels that generate power, which allow the mill to be more competitive in pricing. Being a quality conscious mill, the company has carved a niche for itself as a supplier of quality yarns in just a short span of time.
Saravana Polythread is happy with Truetzschler technology and has worked with the DK 740, DK 760, TC 03 and now the TC 10 series of cards. The mill also has installed the spindle monitoring system SPinFO from MAG that has helped it to increase ring-frame efficiency and reduce waste from the 1.2 per cent earlier to just
0.5 per cent now.
Recently the mill has added four EcoPulsarS of 100 drums each. When asked about the decision to go for EcoPulsarS, Thiruvenkatasubramaniam said â€œEarlier we had Savioâ€™s Espero model and we were happy with its performance. So when we decided to expand, Savio was the obvious choice and we took the latest EcoPulsarSâ€. He is happy with the â€œsuction on demandâ€ function of Savio as it directly benefits the bottom line through power savings, which is in line with the companyâ€™s philosophy. Unlike the conventional automatic winders where a common suction fan works all the time wasting energy, there is no common suction fan in EcoPulsarS.
Instead, in EcoPulsarS, each individual drum has a small suction fan and a waste collection chamber which work only when an end breaks. Simply put, when the productive motor (drum motor) works, the suction motor does not operate, resulting in great savings in energy. Further, since there is no common suction fan, there is no necessity for providing a trench for the hot air discharge, thus saving in civil work as well.
The company is expecting two more EcoPulsarS of 100 drums soon. Thiruvenkatasubramaniam has also expressed his faith in Savio as a technology provider, as he plans to buy TFOs from Savio for the millâ€™s next expansion.
Truetzschler, Savio and MAG are all part of A.T.E.â€™s portfolio, and A.T.E. has brought their low life-cycle cost technologies to Saravana. Thiruvenkatasubramaniam expressed his appreciation of A.T.E.â€™s methodical approach, service orientation, and the sales teamâ€™s technical knowledge to give the best solutions.
CATEGORIES Spinning
TAGS PolythreadsSavio EcoSpindlesTruetzschler
Share This