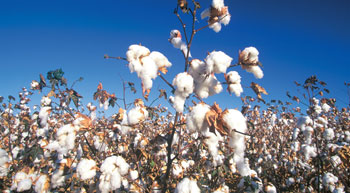 The sharp rise of over 35 per cent in domestic cotton prices since May 2016 will squeeze ginners and spinners profitability by over 15 per cent, says India Ratings and Research (Ind-Ra). Ind-Ra expects prices to remain elevated around the current levels of Rs 120 per kg to Rs 127 per kg till the end of the cotton crop year of September 2016. The spike in cotton prices will adversely impact the profitability of pure cotton ginners and spinners due to their inability to pass on this steep increase to their customers, at once, due to decreasing cotton demand and increased competitiveness of manmade fibre.

The sharp rise of over 35 per cent in domestic cotton prices since May 2016 will squeeze ginners and spinners profitability by over 15 per cent, says India Ratings and Research (Ind-Ra). Ind-Ra expects prices to remain elevated around the current levels of Rs 120 per kg to Rs 127 per kg till the end of the cotton crop year of September 2016.

The spike in cotton prices will adversely impact the profitability of pure cotton ginners and spinners due to their inability to pass on this steep increase to their customers, at once, due to decreasing cotton demand and increased competitiveness of manmade fibre. Cotton is facing fierce competition from manmade fibre, as it is a cheaper alternative and also since manufacturing manmade fibres has become more cost effective due to the decrease in crude prices since 2014. In fact, in spite of lower cotton production in CY16 (Crop Year October 2015 to September 2016) as compared to CY13, the prices have consistently remained lower than the peak prices of CY13, on account of the lackluster demand for cotton.

The skyrocketing cotton prices will impact small textile players the most, as cotton is their key raw material, and this would shrink their inventory holding capacity. Ginners and spinners are most likely to be affected, however, some organised spinning units with interchangeability from cotton to blended or manmade yarn, will be able to adapt. Also players which stocked up cotton at lower prices in March-April 2016 are better placed.

Further, fabric manufacturers are likely to be affected the least, on account of their ability to interchangeably use looms. Cotton traders are likely to perform substantially better year-on-year in CY17, on account of inventory gains from existing stock purchased at lower prices of below Rs 34,000 per candy (one candy is 356 kg) in March (last month of the cotton production season) and being sold at higher realisations of above Rs 36,000 per candy post May, up to Rs 42,000 per candy in June.

The spike in cotton prices is due to the 7.4 per cent yoy fall in its production domestically at 33.8 million bales (1 bale = 178 kg) in CY16, as per the Cotton Advisory Board estimates and 18 per cent yoy globally to 98.1 million bales, as per the United States Department of Agriculture. Further, the recent bad weather in the US?s cotton producing states is likely to lower production of cotton in the US in CY17. Hence cotton prices are likely to remain elevated globally in the near term.

The dip in cotton production in India is mainly due to two consecutive bad monsoons and damaged cotton crop, caused by the pink bollworm pest in the central and southern belts in India and due to the whitefly pest attacks in northern India. Despite higher realisations, the acreage under cotton cultivation up to end-July 2016, shrank to 96 lakh hectares in CY17 from 106 lakh hectares in CY16 according to a press information bureau release.

This decline is attributable to a fear of losses from pest attacks and due to the lack of alternatives to biotech cotton hybrids. And this could push up cotton prices further, however increasing demand for manmade fibre, will contain the price rise.

Import of raw cotton jumped 33 per cent at 16,535 tonne this year until March as compared to 12,426 tonne a year ago. Textile spinning mills had started importing cotton in June, as prices were ruling higher in the local market compared to the international market. India had imported around 1.2 million bales by July 2016. One of the reasons for the increase in imports is the high exports of 57.72 lakh bales till May 2016 at the start of the cotton year (the cotton production estimates for the year were higher than actual), which resulted in a shortage in the domestic market. However, international cotton prices have also increased in August, which will likely reduce imports, as the difference between domestic and international prices converges.

India?s cotton exports dropped 3.71 per cent yoy to Rs 64,656 million in April-May 2016, mainly because exports to China fell 28 per cent yoy to Rs 12,058 million. At end-July 2016, the cumulative sales from the state reserve sales auction in China, stood at over 1.63 million tonne out of its planned 2 million tonne, with every session seeing almost the entire stock offered being purchased. Nonetheless, India?s exports to Pakistan increased a whopping 95 per cent yoy to Rs 4,620 million in April and May 2016, on account of lower domestic production in Pakistan due pest outbreak and adverse weather conditions. Cotton exports are likely to remain muted till the arrival of next cotton crop in October, 2016, considering the shortage in the domestic market.

The recent Government directive to the Cotton Corporation of India (CCI) to sell its entire cotton stock acquired through the minimum support price scheme to micro, small, medium scale spinning units will help contain the price rise of cotton. CCI had an inventory of 27,000 bales before the start of the auction.

However, Ind-Ra believes that cotton prices will not see a steep decrease, till the arrival of the next cotton crop, since the prices already factor in the release of stock from the inventory.

With the application of the goods and services tax, both manmade and cotton fibre will likely be taxed at same rate, as opposed to the 12.5 per cent excise duty levied on manmade fibre and none on cotton fibre (that is not combed or carded). As a result, Ind-Ra expects that manmade fibres? competitiveness is likely to increase further as compared to cotton fibre. That said, the impact of the goods and service tax, would likely be seen in the second half of CY17.

Ind-Ra believes that despite the adverse impact of high cotton prices on the majority of the textile players, the textile industry?s overall contribution to the economy, would be affected only marginally.

The textile industry contributes around 5 per cent to India?s GDP and around 14 per cent of the total exports. The Textile Ministry?s recent initiatives to promote handloom-made cloth, government proposed measures of flexibility in labour laws, tax and production incentives to boost the ready-made garment industry with a focus on export, if implemented as planned, will assist the industry in maintaining or even increasing its contribution to the overall economy, in terms of contribution to GDP. The increase in cotton prices and the consequent decline in profits for various cotton textile players will likely be compensated by savings from various proposed incentives and increased demand from various Textile Ministry?s initiatives to promote domestic textile. Successful implementation of government measures towards increasing the focus on and the demand for ready-made garments and handloom products in domestic as well as international markets, will lead to exports of more value added products with higher realisations and profitability. This is in contrast to the exports of the commodity products of raw cotton and yarn, which constitute the majority of exports in the textile sector, as of now.

[The article has been contributed by India Ratings. Analysts: Ruchi Shah, Purti Shenvi and Amey Joshi]