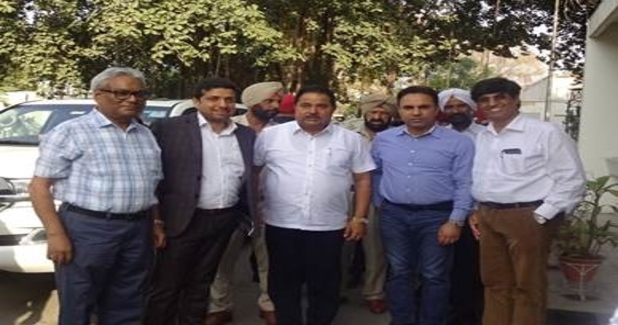 adminApril 10, 2019 12:00 am 0
Om Parkash Soni, Education Minister of Punjab, visited the OCM factory, the second largest manufacturer of worsted fabrics in the country. He was warmly welcomed by Vikram Mahaldar, Managing Director & CEO, OCM, and Functional Heads from respective departments, on behalf of the entire company.
He was also presented with a memento to honour his visit. A sit-down session followed with the management, and entailed discussions focusing on the illustrious heritage and journey of OCM that began in 1924. Apart from this, the superior products and immense employment opportunities (both based on merit and on-the-job training) were also touched upon.
Engaging in dialogue about the growing economy needs, subjects from the GDP growth to boosting employment opportunities were discussed, with common consensus that Government and industry needed to work hand-in-hand to ensure its further development.
The management thanked Om Parkash Soni for his continuous support towards OCM. Om Parkash Soni praised OCM for being a legacy in Amritsar â€“ and also its pride. He mentioned that OCM has stood the test of time for close to a century. He also appreciated the fact that OCM is a big brand and known nation-wide. OCM would continue to have his individual support, along with the support of the Punjab Government.
Well revered for its quality and a leading name in the fabrics, apparel and fashion industry, OCM began its journey in 1924. In 1972, it forayed into manufacturing worsted fabrics for the Indian and overseas markets.
Today, the companyâ€™s ownership lies with the promoters of the Donear Group. With the factory in Amritsar, Punjab, and the corporate office in Delhi, OCM is the second largest manufacturer of worsted fabrics in the country, with an employee base of over 1,500 people, working relentlessly towards achieving customer satisfaction.
The OCM factory spans across 37- acres with new generation technology. There is an in-house single-roof facility for every processâ€”from fibre to fabricâ€”through the stages of recombining, spinning, weaving, dyeing and finishing.
CATEGORIES Industry Update
TAGS apparel manufacturerfabric manufacturerfashion clothingfashion industryOCMworsted fabric
Share This