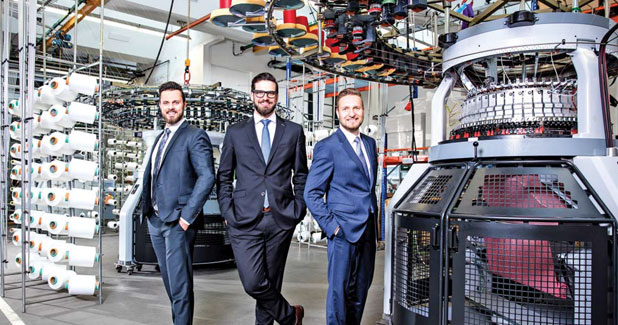 Mayer & Cie. continues its series of successes in 2016

Over the past year, Mayer & Cie. cracked the Euro100-million turnover mark; across the whole group 2016 sales amounted to around Euro105 million and have therefore grown considerably again compared to the previous year.

Over the past year, Mayer & Cie. cracked the Euro100-million turnover mark; across the whole group 2016 sales amounted to around Euro105 million and have therefore grown considerably again compared to the previous year.

The Albstadt-based circular knitting machine manufacturer Mayer & Cie. (MCT) can once again look back on an extraordinarily successful financial year. Mayer & Cie. has been able to record a substantial increase in sales of around ten percent for 2016. With regard to the number of machines produced during the year, the result was about 200 more than in 2015. The ongoing positive trend in business development is also reflected in the companyâ€™s recruitment figures: its base in Albstadt alone has welcomed 40 new members of staff, and across the Group as a whole there have been 55. In order to ensure this success continues, Mayer & Cie. are planning further investments at all three locations in 2017. One important goal is to reduce the long lead times resulting from demand.

â€œThe year 2016 was once again a record year for our companyâ€, says Mayer & Cie. Managing Director Benjamin Mayer. â€œThat is down to our employees, and they deserve our thanks for having made this renewed success possible in the first place.â€

Over the past year, Mayer & Cie. cracked the 100-million-Euro turnover mark; across the whole group 2016 sales amounted to around 105 million and have therefore grown considerably again compared to the previous year.

The main reason for the successful conclusion to the year is the very good order situation. Several times over the last year, the circular knitting machine manufacturer was able to record record-high numbers of incoming orders. Correspondingly, the number of machines produced rose once again in 2016: at 1,500, it was 200 more than the previous year. It was primarily from Turkey, India and China, which have all been strong textile markets for many years, that Mayer & Cie. received a large number of orders. Nevertheless, says Mayer, the demand for premium machines is growing the world over. This applies particularly for new developments, including the high-performance machines Relanit 3.2 HS for single jersey fabric and OVJA 1.6 EM HS for patterned mattress material. The D4-2.2 HPI interlock machine, also introduced in 2015, has already become a best-seller.

As a result of the huge order volumes and the positive overall situation, Mayer & Cie. has recruited around 55 new members of staff within one year across the whole group. At the headquarters in Albstadt alone, there are now around 40 more employees at work than one year ago. The number of apprentices has also increased: 22 young people are currently completing a traineeship or a combined study course at Mayer & Cie. in Albstadt.

â€œTraditionally one step aheadâ€ is the guiding principle for the knitting machine manufacturer. To ensure it stays that way, in 2017 this family-run company will make further investments in its three production sites in Albstadt, the Czech Republic and China. The overriding goal is to reduce lead times. Managing Director Benjamin Mayer: â€œOur customers are now waiting up to ten months for certain machines. That is too long, and itâ€™s something we need to change.â€

In the course of 2016, Mayer & Cie. has already implemented pioneering decisions: With the construction and expansion of the Czech factory and the establishment of further machine production lines in VsetÃ­n, the premium manufacturer is also able to hold its own in the mid-range segment of the market. With new appointments in important strategic roles at the parent company, the firm hopes to tap into new customer segments. New, modern manufacturing machines have been purchased in production. These will be followed by further acquisitions in Albstadt in 2017, which include a few in-house developments by Mayer & Cie., for example a slitting cutter machine. Machines like this, produced by MCT itself, are specifically tailored to the requirements of circular knitting machine construction and the companyâ€™s own production processes. Also on the plan for Albstadt in 2017: Production of the new, fully-automated high-rack warehouse, further modernisation of the administration building and comprehensive innovations in the companyâ€™s own IT and software.

â€œThe year 2016 was once again a very good year for our companyâ€, says Benjamin Mayer. â€œWe are now facing the challenges of 2017 â€“ all the while firmly convinced that we are on the right path to continued success. We are therefore expecting a slight increase in sales again in 2017.â€