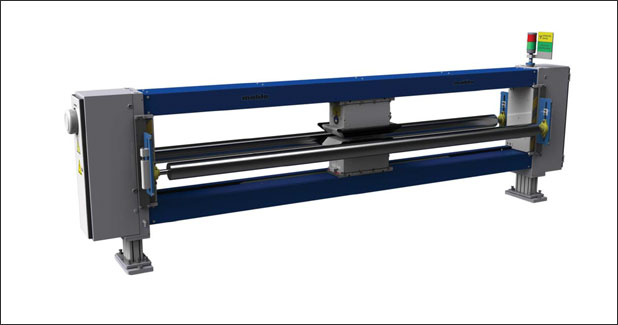 Mahlo solutions in demand for TT

Mahloâ€™s centrepiece at the CINTE Techtextil will be the web gauging system Qualiscan QMS-12 among the latest developments in measuring and controlling of quality critical parameters within the running web.

Mahloâ€™s centrepiece at the CINTE Techtextil will be the web gauging system Qualiscan QMS-12 among the latest developments in measuring and controlling of quality critical parameters within the running web.

Leading German machine builder for automatic weft straighteners and online quality control systems Mahlo GmbH + Co. KG is showcasing at upcoming CINTE Techtextil from 4 to 6 September in Shanghai. The show is the daughter show of the well-established Techtextil in Germany and is considered to be one of the most important trade fairs for technical textiles and nonwovens in Asia.

Mahlo informs with its China representative Frank Fei about the latest developments in measuring and controlling of quality critical parameters within the running web. The centrepiece, almost everything revolves around at the Mahlo booth, is the web gauging system Qualiscan QMS-12. â€œThe tool gauges parameters such as basis weight, thickness or moisture across the entire widthâ€, Frank Fei explains. To achieve this, up to five sensors are traversing simultaneously on sturdy scanners, constantly collecting data and transmit them to the interface. In use are radioactive sources as well as infrared, laser, microwaves and air permeability sensors.

â€œAt CINTE, we anticipate a strong interest in our infrared sensor Infrascope NIRâ€, so Fei. Particularly for nonwoven producers in the spun lace industry â€“ an emerging sector in Asia â€“ the sensor is the ideal tool. It measures the absorption of infrared energy while identifying basis weight and moisture at the same time. Those important parameters can be measured and controlled precisely in a spun lace unit. Due to a very high spectral resolution, the sensor can distinguish between components with very similar IR absorption. This capability allows the highly selective individual measurement of a specific component or layer in the web without interference from other components. And all without the use of radioactive isotopes. With the Qualiscan QMS, not only the product quality is improved but also raw materials can be saved.

Visitors at the Mahlo booth can also find out more on possibilities for web gauging as well as technologies for straightening of warps in knitted and woven fabrics. Mahlo GmbH + Co. KG Mahlo GmbH + Co. KG belongs to the worldwide leading manufacturers of measuring, control and automation systems for the textile and finishing industry as well as the coating, film and paper sector. Mahlo is located in Saal on the Danube in lower Bavaria but operates worldwide: Six branch offices in Italy, Belgium, Spain, Brazil, China and the U.S. serve as support stations for the key markets. Numerous international agencies and service stations offer customer support throughout the whole world.