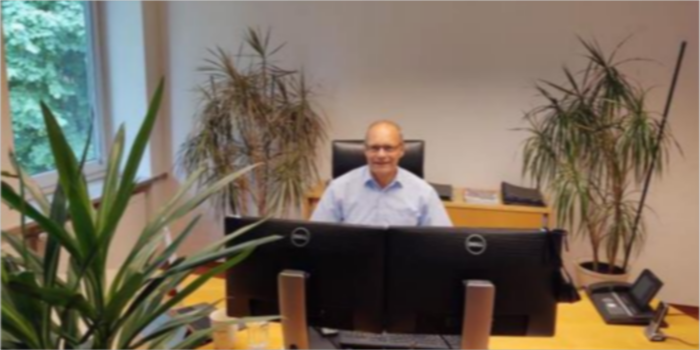 For 75 years, Mahlo GmbH from Saal on the Danube has been setting worldwide standards in the measurement and control of web-shaped goods.

In spite of the “old” age, the machine manufacturer never tires of constantly developing in order to be one step ahead of the challenges of their customers.

If Dr Heinz Mahlo could see what has become of his small company, which he founded in 1945 after the end of World War II – he would certainly be very proud. As a visionary engineer with a flair for technical innovation, Dr. Mahlo focused early on the development of measuring and control systems for the textile industry. His work culminated in the patent for the first automatic weft straightener at the end of the 50s and established Mahlo’s position as the world market leader in the industry. Today the name Mahlo is not only synonymous with straightening machines, but also describes quality and reliability. Mahlo weft straighteners and process control systems for textile finishing can be found in all important markets. Countless products of many large and well-known brands have passed through a “Mahlo” during their production.

Quality control as an emerging sector
In spite of an indescribable success story in the textile sector, the think tank from Lower Bavaria proved early on that it had the foresight not to rest on past laurels and its own showpiece product. In the mid-90s, engineers at the company, who carried on the innovative spirit of the late company father, developed the Qualiscan QMS quality control system. The system enabled the nonwovens, plastics and paper industries to measure and control critical process parameters such as moisture, basis weight or layer thickness. A trend-setting decision. These markets are becoming increasingly important. How strong this special year has shown, in which the nonwovens industry is growing, but the textile industry is shaken by the crisis. This makes it all the more important for a company not to stand on just one mainstay.

Industry 4.0
Changes are not only occurring in the markets, but also within industrial plants. The networking of production is progressing in giant steps. Mahlo has therefore developed a digitalisation concept that opens the door to Industry 4.0 for customers. The data generated by the systems can thus be called up at any time to optimise processes and control equipment online.

Technical know-how combined with renowned products and high service quality have established Mahlo with customers all over the world. In order to serve the international markets as reliably as its home country, branches have grown in the USA, Italy, Belgium, Spain and China in addition to the headquarters in Saal. In addition, Mahlo works with service stations and sales partners in over 100 countries. Despite the worldwide business, Mahlo’s focus has always remained in Germany, or more precisely in Bavaria. All machines are developed and built at the headquarters with motivated, mostly self-trained employees. This guarantees Quality Made in Germany and also creates an independence from supply chains, which can be of great importance in times of bottlenecks.

But what would have pleased company founder Dr Mahlo even more than the economic success is the fact that the family spirit that he has planted right at the heart of his company is growing stronger than ever. Mahlo is still family-owned today, and the cooperation between owner, management and staff plays a major role. Mahlo is more than just a workplace. It is precisely this combination that creates the best conditions for writing the next successful chapters together.

Ralph Greenwood-Mahlo, owner, said, “My grandparents laid the foundation for Mahlo’s success. Our task now is to lead the company into an equally successful future without forgetting our core values. Mahlo is a family business that takes responsibility for its employees and values fair and respectful treatment of customers and business partners.”

Rainer Mestermann, CEO, said, “Our 75th anniversary marks an important milestone in the company’s history. We see it as a confirmation of the continuous development of the company and at the same time as an incentive to further increase the competitiveness of our customers with technologically leading products and tailor-made services.”

Mahlo GmbH belongs to the worldwide leading manufacturers of measuring, control and automation systems for the textile and finishing industry as well as the coating, film and paper sector. Mahlo is located in Saal on the Danube in lower Bavaria but operates worldwide: Five branch offices in Italy, Belgium, Spain, China and the US serve as support stations for the key markets. Numerous international agencies and service stations offer customer support throughout the whole world.