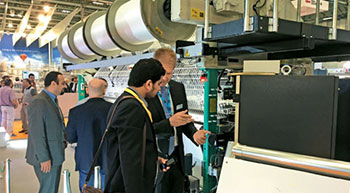 KARL MAYERÂ´s stand once again proved to be much more than one of the first ports of call for the warp knitting and warp preparation sectors at this yearÂ´s ITM fair. The warp preparation section in particular was crowded, despite a relatively slow start to the trade fair in general.

KARL MAYERÂ´s stand once again proved to be much more than one of the first ports of call for the warp knitting and warp preparation sectors at this yearÂ´s ITM fair. The warp preparation section in particular was crowded, despite a relatively slow start to the trade fair in general. In addition to its main Turkish clients, KARL MAYER welcomed many visitors from Iran. Â´There really was a lot going on,Â´ said Andreas Fauerbach, the Regional Sales Manger. Iranian companies are profiting from the lowering of travel restrictions to Turkey, and intend modernising their plants now that sanctions have been lifted. Another large group of visitors came from North Africa, mainly from Egypt, Algeria, Morocco, Tunisia and Ethiopia. On the whole, however, the significance of the ITM fair was mainly regional.

KARL MAYER was showing the HKS 4-M EL of the warp knitting business unit. This new, high-speed tricot machine was producing a range of structured upholstery fabrics during the machine show, and was demonstrating its impressive speed and patterning flexibility.

The pieces in the fashion collection on show were also proving to be a real magnet for the visitors. Lace with an embroidered look, produced on an MLF 46/24, was being shown in a skirt/top ensemble, and an outfit consisting of trousers and a jacket containing the lace produced on a JL 65/1 B Fashion machine featuring bourdon cord was also on display. Â´As far as processing thick bourdon yarns is concerned, we are getting more and more enquires from apparel producers and home textiles companies,Â´ said the Sales Manager, Bastian Fritsch. He also had many conversations on the patterning possibilities of the JACQUARDTRONICÂ® Lace machine, and noticed a growing interest in loop plush and raised fabrics. There were also numerous questions on the applications of double-bar raschel machines, particularly for producing shoe fabrics and womenÂ´s outerwear.

Once the applications and machine technology had been discussed, Bastian Fritsch was able to conduct some successful contract negotiations. Â´Despite the political situation, our customers want to move forward,Â´ concluded this sales expert.

In the warp preparation sector, the innovative size box VSB is the core of the PROSIZEÂ® sizing machine, and attracted the attention of many visitors. According to the Sales Director, Dieter Gager, there were slightly fewer visitors than had been expected, but they came to discuss specific issues. Â´The calibre of the contacts was extremely high,Â´ explained the Head of Sales for KARL MAYERÂ´s warp preparation machines. New projects were initiated during the course of the conversations, and current projects on the different applications and machines in KARL MAYERÂ´s product portfolio were discussed. The main topics of the conversations were technical systems for manufacturers operating in the denim sector. In addition the visitors were impressed by the efficient operations of the VSB sizing unit.

The KARL MAYER CONNECT app
Martin Hornig was able to supply some useful information on the subject of service. The Head of the Service Division was demonstrating the KARL MAYER CONNECT app live on the HKS 4-M on show, and was delighted by the positive feedback he received. Â´Our visitors grasped the functions and uses of the app straightaway. They immediately saw how photos could be taken and uploaded, and how a service request could be sent,Â´said Martin Hornig when commenting on the promising results of the practical trials carried out using this new technical support app.