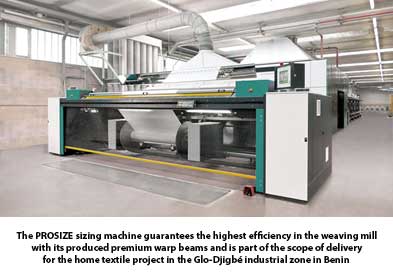 The company is to deliver several direct warpers and sizing machines, as well as a sectional warping machine to West Africa.

As part of a special project, home textiles production is set to be a particular focus in the Glo-Djigbé Industrial Zone (GDIZ), Benin. The project involves building up capacity in the spinning, circular knitting and weaving sectors, thus investing in textile machinery from renowned manufacturers. Contracts were signed with the KARL MAYER Group for warp preparation machinery. The innovative world market leader is to deliver several direct warpers and sizing machines, as well as a sectional warping machine to West Africa – no ordinary order for the company. “For the most part, we serve customers in typical textile regions. Benin is almost brand new territory for us from a business perspective. We are looking forward to sharing in this exciting project that will positively affect the country’s economic development,” said Peter Obrist, Senior Sales Manager at KARL MAYER Warp Preparation.

Benin is a small West African country with bright prospects. Only 45 km from Benin’s capital Cotonou in the commune of Abomey-Calavi, the Glo-Djigbé Industrial Zone (GDIZ) is currently being built on an area covering 1,640 hectare, where locally grown agricultural products are to be processed. Local products mainly include cotton, cashew nuts, pineapples, shea nuts and soybeans. The broadening of national value creation is expected to create a total of 300,000 jobs, while also fighting poverty and strengthening the competitiveness of the “Made in Benin” brand. Construction on the industrial zone began in June 2021, and the project is due to be inaugurated on 31st July 2022.

A joint venture between Arise Integrated Industrial Platforms (Arise IIP), Africa Finance Corporation (AFC) and the Republic of Benin was founded to establish the push economy. Arise IIP alone plans to invest 1.5 billion dollar. As of March 2022, a total of ten companies had already relocated to the GDIZ, including representatives from the textile industry.

The KARL MAYER Group machines are scheduled for delivery in spring 2023. The warp beams are intended for processing into terry cloth and bed linen.