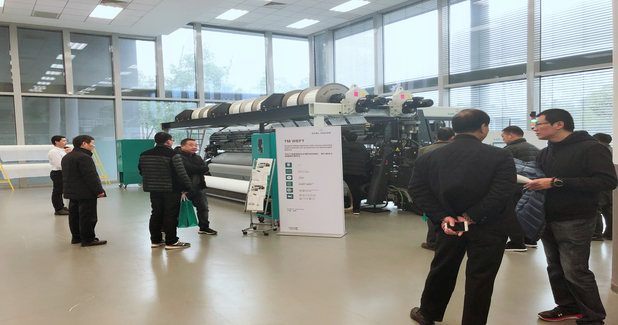 adminJanuary 23, 2019 12:00 am 0
A well attended in-house event was held in Changzhou in China recently to launch KARL MAYERâ€™s new warp knitting machine with weft insertion.
KARL MAYER has developed a new warp knitting machine with weft insertion, the TM WEFT, and successfully launched this new machine at an in-house show held at its Chinese subsidiary in Changzhou. Representatives from more than ten companies came every day between 15 and 18 January 2019 to attend the machine presentation, and these included knitters and weavers, as well as finishers interested in moving into textile production.
The guests travelled from all over China, mainly from Jiangsu and Zheijiang, as well as from Shandong and Hebei. They were all impressed by the cost:benefit ratio of the machines on show. Two models of the TM WEFT, 247", E 24, were being demonstrated, both producing an interlining, ie, a traditional fabric with one guide bar and a version having a higher drapabiity for special applications with two guide bars.
Both machines were running at an impressive level of stability and at a high speed of 1,500 min-1. The entire concept was extremely well received. The feedback according to Hagen Lotzmann was that, â€œOur customers were impressed by our focus on the functions, easy operation and reliability of the TM WEFT.â€ Together with Steffen Trabers from ILLIES China, the companyâ€™s agent in the region, the Sales Manager of KARL MAYER Technische Textilien had many conversations relating to specific projects. The first machines have already been sold and further orders are expected over the next few months.
With its features and conceptual direction, the TM WEFT, as a basic model, is designed to complement the existing WEFTTRONICÂ® II HKS, which will continue to be available for the high-end market. KARL MAYER is thus extending its tried-and-tested two product line strategy in its Technical Textiles Business Unit.
CATEGORIES Industry Update
TAGS karl mayerknitting machinestextile machinestextile technologiesweaving machines
Share This