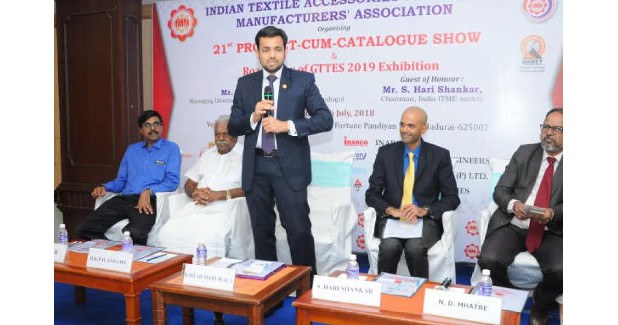 Presently the Indian textile engineering industry is fulfilling only 45-50 per cent requirement of the domestic market of Rs 15,000 crore, while exports about Rs 6,500 crore worth textile machines and accessories. It has targeted to reach to Rs 25,000 crore by 2025.

Presently the Indian textile engineering industry is fulfilling only 45-50 per cent requirement of the domestic market of Rs 15,000 crore, while exports about Rs 6,500 crore worth textile machines and accessories. It has targeted to reach to Rs 25,000 crore by 2025.

On the other hand, Tamil Nadu has the largest cotton textile industry cluster in India, which contributes 39 per cent of the total production in the country. With 4.13 lakh handlooms providing employment to 6.08 lakh weavers; 3.66 lakh powerlooms; 1,889 spinning mills (18.92 million spindles and 1,612 million kg of spun yarn per year) providing employment to 2.40 lakh persons; 4,000 knitwear and woven garment production units providing employment to 5 lakh persons and 2,614 hand processing units and 985 power processing units; further supported by 40 textile parks under the Scheme for Integrated Textile Parks (SITP) have been the main reasons for the State to be the largest textile cluster on the country map. These have been further supported by the low cost skilled labour, favourable domestic market, abundant and low price supply of raw-materials.

In order to reach the set targets of a production level of $350 billion from the current level of about $100 billion, the contribution of hi-tech machines delivering quality goods in mass quantities at competitive price plays a vital role. The quality accessories and spares helps these machines to sustain their performance at low maintenance cost.

During the inauguration session, Kaizar Z Mahuwala, President, ITAMMA, after welcoming the dignities on the dais and the audience gave in details about the activities of ITAMMA. He mentioned about the importance and benefits of such events those organised at Nagpur, Panipat, Silvassa and now at Madurai. He further stretched upon the importance of technology and innovation, being the mantra to sustain in the global competitive challenging market.

He said, â€œToday we are proud to state that â€œITAMMA Voiceâ€ Volume No. 4 based on the theme â€˜Brand Indiaâ€™ is being released of one of the leading brands of India for spinning textile machines.â€ He also invited the suggestions, views, of the audience and further appealed to contribute articles and advertisements for the next issue to be released in the month of September 2018. Along with Chief Guest and Guest of Honour, he thanked Seema Srivastava, Executive Director, India ITME Society, for participating in this event along with her team all the way from Mumbai.

Shankar, in his speech, gave the details about the GTTES 2019 to be held from January 18-20, 2019 at Mumbai. He further mentioned that this will be a good platform to the textile industry to explore the new technologies and business contacts especially with the overseas participants. He also mentioned about the technical seminars being organised during the event for the benefit of the participants both exhibitors and visitors, to get information on the developments in technical textiles.

MK Palanisamy inaugurated the show as the Chief Guest and also complimented ITAMMA for this event at Madurai giving an opportunity to the textile industrialists of Madurai and Dindugul to know about the details of so many products in a short spell of five fours. He also released publication 4th Volume of â€œITAMMA Voiceâ€ on the theme â€œBrand Indiaâ€ a quarterly print magazine.

Kaizar Z Mahuwala, President, ITAMMA thanked the Chief Guest MK Palanisamy and S Hari Shankar with a memento. While Shankar and Srivastava thanked Mahuwala, with a memento on behalf of ITAMMA for organising road show of GTTES 2019 during the catalogue show.