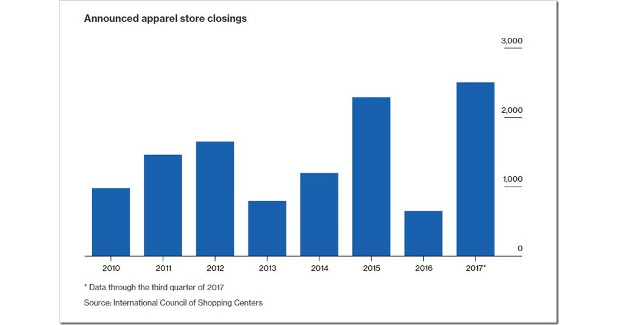 Is US apparel market dying?

A recent Bloomberg report over the changes in consumer behavior of US customer raises serious questions on the pattern of income spending which seems to be anti-clothing and pro-travel & food . This is an early sign of a big problem for the Apparel Industry.

A recent Bloomberg report over the changes in consumer behavior of US customer raises serious questions on the pattern of income spending which seems to be anti-clothing and pro-travel & food . This is an early sign of a big problem for the Apparel Industry.

The Apparel Industry in US has not been in a good shape for last few years and that is evident if you look at the number of bankruptcy filled by the Apparel Retailers in US over the years and still counting. Earlier , it has been perceived that due to competition from E-commerce and specially companies like Amazon , the stores have been failing to attract the customers but thatâ€™s not the whole story. There are just systemic changes happening in consumer spending patterns which is reducing the space for everybody.

At a time in late 90s , the share of clothing spending for US households was 6.2 per cent .However after forty years , the share reduced by 50 per cent to about 3.2 per cent in-spite of the fact that both income and absolute spending by Americans has increased substantially during this period. What went wrong ? The share of Apparel has been eaten up by Travel, Dining out and other adventurous activities which offer more satisfaction to consumer . The expenditure on â€˜Experiencesâ€™ â€“ mainly Travel and Food -has grown to 18 per cent of spending according to the reports. Apart from that , expenditure on Technology alone accounts for 3.4 per cent of spending which is now greater than that of apparel .

The choice and the flexibility to wear any kind of clothing has during most occasions has been one of the reason for the falling expenditure on clothing. There was a time when certain set of cloths were allowed . Formals in the office and casuals at weekends. However with time, companies have started allowing flexibility and then on Fridaysâ€™ casuals were allowed and then after some years , casuals took over the formals and are accepted for entire working days by many companies affecting seriously the purchasing of formal wears and this big reduction in one category has affected the per capita expenditure on clothing overall.

The price of apparel items has been going down as the production cost has reduced due to the shifting of manufacturing in lesser expensive labor markets and being the price competitive in the market for longer term have become the true recipe of success now. Eg Leviâ€™s 501 original-fit jeans used to get steadily increase its price. However we can see that a pair cost $58 in 2009 in US , then rose to $64 three years later, only to fall back down to $59.50 last year.