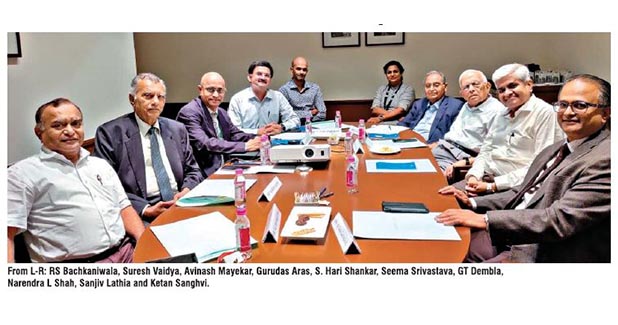 Celebration on milestones is the first thing an organisation is seen to be doing. India ITME Society however differs to do something much more beyond than just the celebrations.

adminNovember 12, 2019 12:00 am 0
Celebration on milestones is the first thing an organisation is seen to be doing. India ITME Society however differs to do something much more beyond than just the celebrations. To commemorate this occasion, the Society is launching a lot of new activities for the betterment of the entire textile society right from the institutes, associations to the industry.
One such activity of the society is an award contest for the various associations in the textile sector who are working for the betterment of their segment as well as for the hardworking women leaders of this sector. The Society has decided to use this opportunity to recognise and give due credits to the honourable service that various associations are providing to the textile industry.
Working to make their venture successful, India ITME Society had called for open nominations from all the associations of the industry through mailers, website and social media campaigns. The award nominations for following categories were called for: After running the campaign for more than two months and after collecting successful applications in this period on the November 4, a panel of jury meet at the Oberoi, Mumbai for finalisation of winners.
The panel of jury consisted of textile stalwarts of the industry comprising of Suresh Kotak, Gurudas Aras and Suresh Vaidya along with Chairman of ITME Society Chairman S Hari Shankar, Ketan Sanghvi, Narendra L Shah, GT Dembla, Sanjiv Lathia and RS Bachkaniwala.
The jury meeting took place from 11.30 am to 3.00 pm on November 4, 2019. The jury discussed on the nomination received for various categories, and after fine discussions and scrutinising the fine-tuned applications, the jury individually ranked the shortlisted nominations.
Post lunch, the compiled result of all the jury rankings was discussed and the final winner names were sealed and stamped by the jury. The announcement of the winner will be done on the â€œGlobal Networking Programme for Associationsâ€ organised on December 20, 2019 at Taj Mahal Palace, Rendezvous, Gateway of India, Mumbai from 1.00 pm onwards.
India ITME society along with their knowledge partners Suvin Advisors prior to jury meeting had contacted the various associations and women leaders to submit their applications and later fine-tuned all the applications received and presented shortlisted nominations in front of the jury to make the final decision. Few of the well-known associations who are part of India ITME Society, where not allowed to take part in this contest in order to maintain the unbiased nature while selection.
This award contest is just a beginning from the Society and it has plans to present such awards at their every exhibition including ITME 2020. They believe this initiative will help to recognise and bring forward the outstanding work done by certain unknown associations for years today. With these awards the society aims at further encouraging associations to work an extra mile and get inspiration from their fellow associations.
CATEGORIES Apparels & Garments
TAGS Emerging associationHardworking AssociationsHari ShankarIndia ITME SocietyITME 2020ITME Society
Share This