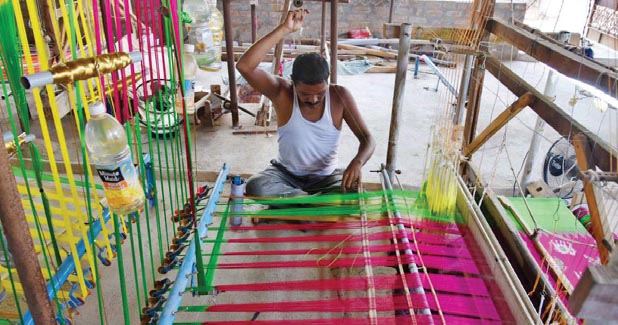 Kunal Singha provides a systematic review of the present scenario of Indian handloom sector. The overall facts and findings can help the stakeholder from this sector to formulate apt strategies through adding vast knowledge to the existing literature body of handloom current state.

Kunal Singha provides a systematic review of the present scenario of Indian handloom sector. The overall facts and findings can help the stakeholder from this sector to formulate apt strategies through adding vast knowledge to the existing literature body of handloom current state.

The mention of the word handloom certainly evokes the readerâ€™s mind to think of India. This is based on the fact that this has undoubtedly been a key in the growth of the nation to the extent of being critical to its history. The definition of the word means merely the loom that is driven by the hands or legs or by the combination of both. In India, handloom industry means more than the definition given above. This is based on the fact that it has been of significant impact and it has undoubtedly been pivotal in driving the nationâ€™s culture as well as the economy over the years.

India is a country that has created a niche of its own when it comes to making of high-quality fabrics. Those that have been able to acquire the skills of working as handloom weaver or hand spinner have been a key segment in the Indian culture in the sense that their services have certainly been on a high demand over the years dating back in the 18th century. Handloom sector contributes nearby 15 per cent of the cloth production in the country and 95 per cent of the worldâ€™s hand woven fabrics comes from India. Handloom sector in India nearly provides direct or indirect employment to more than 43 lakh weavers and allied workers.

History of handloom industry in India

The weaving industry in India can be traced back to the days of Indus Valley civilisation. This was the period when the cotton textiles and weaving looms found its strong presence. This was the same period that people majorly used homespun cotton when it came to weaving looms as well as other textiles products. The end products were majorly finely woven cotton as well as the dyed cotton fabrics.

The shuttles were the ones that were found at the excavated sites in the form of the unused material, which was majorly in raw material form. One of these sites that certainly stand out is certainly the Mohenjo Daro site, which is one of the famous places when it comes to the textile industry in India. Over the years, there have been images that have been taken of the first Indian fabric that was indeed effective for many years. The industry may have changed with the introduction of technology, but indeed there is much of history of the initial handloom industry before the current modernisation that has happened over time.

The industryâ€™s successes majorly relied on the available market. This is based on the fact that over the years there has been much exporting of the fine fabrics to other parts of the world notably China and Indonesia as well as the Far East. This was majorly the case back in the 13th century just before the Europeans had started making inroads into India. Later on the market also expanded to some parts of Europe.

The textile industry provide the second best employment in India after agriculture and it facilitates 14 per cent of the total industrial production and occupies to approximately 30 per cent of the total import and export of India. Therefore, we can surely take care of this industry and it is needless to say that each and every component of textile industry should be taken care at the outmost to ensure the country growth and economic advancement.

Textiles industries in India mainly divided into four segments as:

The handloom area assumes an essential part in the nationâ€™s economy. The economic liberalisation, uniqueness, flexibility of production, openness to innovation, adaptability to the supplierâ€™s desireness, cluster approach, strategies to aggressive marketing and implementation of various social welfare measurements has shown the positive sign of growth in Indian handloom sectors now these days. The quality of Handloom lies in the presenting creative outlines, which canâ€™t be repeated by the power loom cloth production anyway. In this manner, handloom shapes a piece of the legacy of India and represents the design and product colour pattern innovation with decent variety and of our nation and the aestheticness of the weavers.

Due to the diverse and wider size of the market, it was divided into three different weaving categories or traditions. There was the rural, the classical and the tribal. The rural category of the weaving tradition majorly represented the familiar and unchanging patterns that were so synonymous with the rural life of the Indians (Agnihotri, 2015). The design of the weaved material displayed figures of things that were so family and easily identifiable with any Indian who was living in the rural part of the nation. This is indeed clear when it comes to the kind of the images of the animals, plants and human beings that appealed to all. This is the reason why these are exactly what certainly summed up most of the designs.

The second category as initially mentioned is classical. This weaving tradition certainly revolved around royalty and court life. The symbols, as well as the forms of the weaving designs, were dependent on who was in the position of power as the ruler. This is so clear that it was indeed a key thing in the sense that it was a form of paying patronage to the ruler of the country and sometimes even the ruler of the region hence a couple of unique designs based on the nature and personality as well as the varied list of the things the ruler liked. The geographical location came to being since each, and every region had its leader hence the all the fabric that was woven to some extent had to have the form of elements or elegance that surely displayed this.

The last category is none other than the tribal. Unlike the insinuation brought about by the name of the weaving tradition, this was majorly done to demonstrate the bold geometric patterns. These patterns were mostly done in strong primary colours and mostly on simple looms that were made up of bamboo.

The performance-based factors for Indian handloom sector (Ramchandra, 2015, Bhalla et al., 2018): The employment structures in the handloom industries are based on a few important factors, which are very crucial for the profitability and economic growth of the artisans in the near future (Agnihotri, 2015);

Various schemes have been launched by the Ministry of Textiles, Government of India to cater those issues as (Annual report 2017-18, Min. of Textiles, GOI);