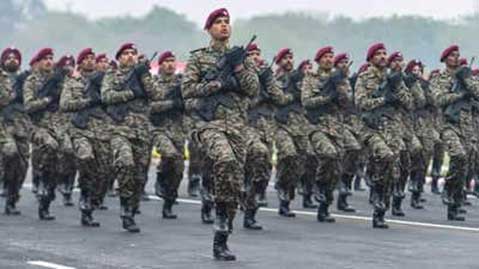 Fight over who will make Indian Army’s new combat uniform

Soon after a new combat uniform was unveiled by the Indian Army, a major battle has erupted over who will manufacture them.

Soon after a new combat uniform was unveiled by the Indian Army, a major battle has erupted over who will manufacture them.

Employees of the state-owned ordnance clothing factories (OCFs) contend they should get the mega contract, while the Indian Army wants an open tender with private companies also in the fray to ensure soldiers get the best possible camouflage fatigues at the cheapest rates. The new combat uniform with a “digital disruptive pattern”, ergonomically-designed in consultation with the National Institute of Fashion Technology (NIFT), was showcased for the first time during the Army Day parade on January 15.

OCF employees, especially the ones at the factory, allege the Union government and the Army are favouring the private sector over the public entities once again.

Defence establishment sources, however, contend the aim is to select the best available facility in the country to manufacture the all-terrain combat uniforms to ensure “uninterrupted supplies with the right price and quality” for the soldiers. “Under the ‘Atmanirbhar Bharat’ initiative, all private players and the OCFs (now under the Troop Comforts Ltd) would be eligible to respond to an open tender and a transparent procurement process,” a source said.

The existing stocks of the current combat uniforms will last for around two years. The supply order for the new lighter, stronger and more climate-friendly combat uniforms, in turn, will be placed later this year, with the supplies slated to begin from early-2023. “The whole process for the induction of the new combat uniform should stabilize by 2023.

The OCFs, in any case, have their hands full with pending orders in a number of areas, including general stores and clothing items,” the source said. “The product improvement in the new combat uniform involved changes in the fabric, camouflage pattern and garment design in collaboration with the NIFT. It was only after rigorous trials with feedback on the shortlisted patterns, designs and fabrics, the final prototype of the uniform was conceived,” he added.