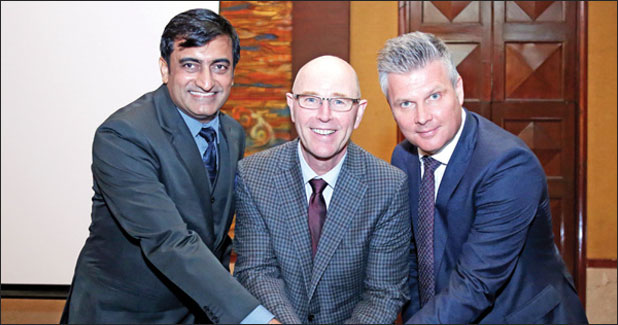 Dynabrade India has reached a new landmark, completing 10 years in India, and celebrated the occasion in Mumbai recently. The 100 per cent subsidiary of the US-headquartered Dynabrade Inc, was formally established in March 2007, though the company had some distributors in the country since the late 1990s.

Dynabrade India has reached a new landmark, completing 10 years in India, and celebrated the occasion in Mumbai recently. The 100 per cent subsidiary of the US-headquartered Dynabrade Inc, was formally established in March 2007, though the company had some distributors in the country since the late 1990s. By 2007, the Dynabrade management was convinced of the India story as by then most leading global automakers â€“ its main market â€“ were already present in India and it was time to have a local presence to manage the logistics more effectively.

Nischal Sachdev, Managing Director, Dynabrade India Abrasive Power Tools Pvt Ltd, has a long association with the company much before it formally established in India. The Indian operations under him also take care of the South East Asia (SEA) and Pacific Rim nations. He welcomed the main distributors and channel partners from across India, specially invited to celebrate the occasion. â€œIt is time for us to take a breather, enjoy the moment and set new landmarks. Being part of our business family, the celebration and the opportunity to meet the management team all at once would enhance your confidence in us and make this journey an exciting one,â€ he said.

For Hardy Hamann, President, Dynabrade Inc, it was his first visit to India and he was impressed. â€œIt is the perfect position to be in a country where the GDP is growing at 7 per cent,â€ he said, â€œand at a rate faster than China. The fact that over 50 per cent of the billion plus population is young is an added advantage. We are also looking at the political stability the country now offers and the soon to be adopted GST regime, which augurs well for increased business.â€

Dynabrade is known for its portable pneumatic abrasive power tools, very popular in the automotive world for high quality finishing. Tracing the origins of the company, Hamann noted that it was founded in 1969 by Walter Welsch at Clarence (near Buffalo), New York and the very first product was the iconic Dynafile belt sander which provided the much needed alternative to hand filing and sanding, and is still in production even as it has evolved. Today, Dynabrade has over 800 products sold in over 90 countries globally, and Walter Welsch, now 93, is still active and Chairman of the Board (he has three older siblings, one a centenarian). Says something for a company that boasts the durability and high quality of its products, most of which are now available with lifetime warranty.

Dynabrade products are used in such industries as metalworking, woodworking, kitchen and bath, marine, transportation and wherever finishing is required on hard machinable surfaces. Hamann also announced the expansion of the India office and warehouse which will soon move to a more spacious building with almost double the area not far from its present location at Navi Mumbai. With a CAGR of 16 per cent during the last 15 years the company has grown over 70 per cent since 2011 and hence the need for a bigger premises. The company also expects the number of Indian dealers/channel partners to cross 100 from the existing 70.

Hamann also elaborated on the Dynabrade strategy for future growth in terms of new products â€“ development of new random orbital sanders, launch of 2.6 HP product line and expansion of source capture vacuum products. The initiatives are moving closer to the customer with a new web-based cost saving programme; and expanding brand exposure through a new design website and social media. The other initiative is investing in plant improvement and new machinery.