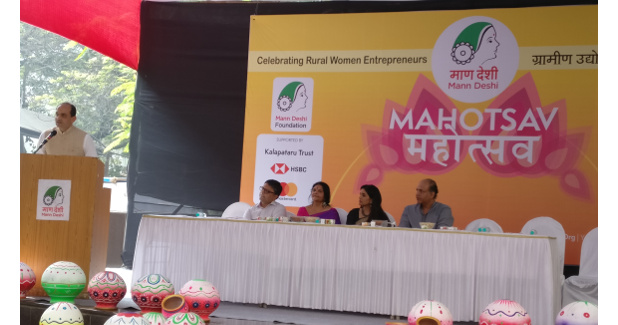 Encouraging and empowering women entrepreneurs from rural areas of Maharashtra, Dow India partnered with the Mann Deshi Foundation to conduct the Mann Deshi Mahotsav, an annual community festival that was held in Mumbai from January 4 â€“ 7, 2018.

Encouraging and empowering women entrepreneurs from rural areas of Maharashtra, Dow India partnered with the Mann Deshi Foundation to conduct the Mann Deshi Mahotsav, an annual community festival that was held in Mumbai from January 4 â€“ 7, 2018. The festival was a platform for more than 90 women entrepreneurs to showcase arts and crafts, culture and cuisine from rural Maharashtra.

Support for the festival is an extension of Dow Indiaâ€™s CSR partnership with the Mann Deshi Foundation, which was announced in 2017. Speaking at the inaugural event, Sudhir Shenoy, CEO, Dow India said, â€œOur partnership with Mann Deshi foundation started with the setting up of the Mann Deshi training centre at Chiplun in Lote. This festival enables us to see first-hand the entrepreneurial spirit of the women associated with Mann Deshi. Their passion to create market-centric innovation, with limited resources and often under challenging circumstances, deserves our support and recognition. It is great to see the spirit of innovation running deep in our society â€“ be it chemistry, community building or supporting regional arts.â€

Resonating Sudhirâ€™s thoughts, Chetna Gala Sinha, Founder of Mann Deshi Foundation, said, â€œMann Deshi Foundation is dedicated to empowering female entrepreneurs and their communities. By 2022, we aim to provide one million women entrepreneurs with access to knowledge and capital, enabling them to have personal and professional agency in their lives. We partner with corporates and organisations who share this intent. Such synergies are critical for creating sustained value for merit of families of beneficiaries, as well as communities in which programs are run.â€

Garnering footfalls of over 20,000, the vast reach of the festival was leveraged by Dow India to generate awareness among consumers and entrepreneurs about the use and disposal of plastics. The company advocated the use of recyclable flexible packaging to promote the circular economy of reduce, reuse and recycle with minimum impact on the natural ecosystem.

Set up in 1996 in Mann taluka, Maharashtra, Mann Deshi Foundation runs a Womenâ€™s Bank and an NGO that works closely with women micro-entrepreneurs, as well as small and marginal farmers. It runs a dozen Business Schools for Rural Women, the first Chambers of Commerce for Rural Micro Entrepreneurs, a Community Radio, a Water Conservation programme and a Sports programme. To date, its programmes have supported over 400,000 women and it has built 10 check dams that have impacted over 50,000 people.