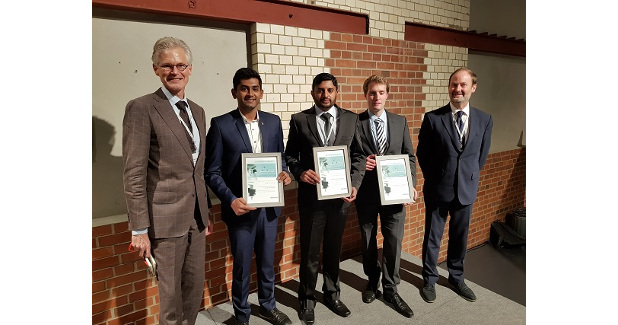 DKTE at the forefront of nonwoven growth

adminAugust 1, 2017 12:00 am 0
Nonwoven and technical textiles have important roles to play towards the growth of the Indian textiles sector.
India wants its textile sector to reach $250 billion by 2020. There needs to be growth in natural fibre, synthetic fibre, conventional and technical textiles sectors to achieve this economic figure. The Government of India has supported the growth of nonwovens industry by establishing a Centre of Excellence in Nonwovens in Ichalkaranji, Maharashtra.
Amid lush sugarcane fields, a nonwoven R&D and incubation centre is fully operational at DKTE Textile and Engineering Institute in Ichalkaranji. Some 90 companies have availed the help from the institute in their product development and research.
Trutzschlerâ€™s 2-meter wide needlepunching line with domestically made through-air bonding machine serve nonwoven companies and start-ups in developing a myriad of nonwoven products that find applications in filtration and insulation. A coating line has been added for functional finishing of nonwovens. Industry regularly uses the manufacturing size nonwoven machines and the testing centre for their product development, stated Aniket Bhute, Assistant Director of the centre.
The centre has been financially supported by DKTE Institute and has been established by public and private partnership stated, Professor P V Kadole, Director of DKTE Institute. Many novel projects such as linen needlepunched nonwovens, solar water nonwoven filter, membranes for ethanol-water separation are currently ongoing at the center.
Nearly a decade ago, this scribe predicted the growth of Indiaâ€™s nonwoven sector using the relationship between per capita nonwoven consumption and GDP growth rate. The model predicted Indiaâ€™s growth to be in double digits, which is now fairly accepted growth figure for the nonwoven sector in India.
Tutorials on nonwovens and technical textiles were delivered by this scribe at the DKTE institute. At this event, Professor P V Kadole, Director of the DKTE institute, emphasised the importance of linkages with industry and international institutes. DKTE institute has about 1200 students in textile curriculum leading to diploma and degree certificates.
Ichalkaranji, situated in a fertile agricultural belt in Maharashtra is a prominent powerloom sector with over 1,20,000 powerlooms in operation in the region. In addition, the region has the largest concentration of shuttleless looms with about 14,000 high speed shuttleless looms. Most recently, support from the Government of India has resulted in the establishment of a Centre of Excellence in Nonwovens, which is serving as an incubation centre for emerging nonwoven sector in India.
By: Seshadri Ramkumar, Texas Tech University, USA
CATEGORIES Industry Update
TAGS conventional textilesnonwovensmart textilestechnical textilesTextile Industrytextile news
Share This