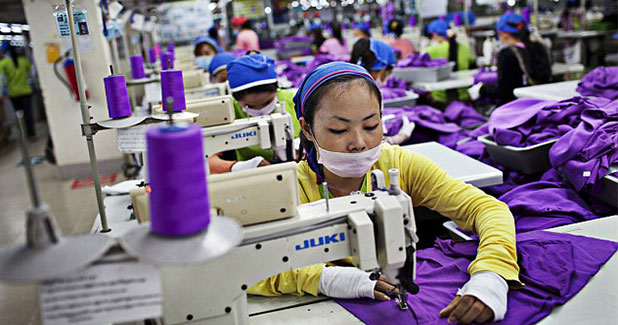 The Cambodian government is calling on international buyers to increase investment in the garment and footwear sector and to introduce new technologies to help modernise the industry, according to a senior official from the Ministry of Commerce (MoC).

adminNovember 23, 2017 12:00 am 0
The Cambodian government is calling on international buyers to increase investment in the garment and footwear sector and to introduce new technologies to help modernise the industry, according to a senior official from the Ministry of Commerce (MoC). Speaking during a meeting with representatives from global clothing brands and unions, MoCâ€™s secretary of state Ok Bung said the garment sector is burdened by low productivity brought about by outdated technology, which sinks the country into low positions within global value chains. â€œI would like to request all buyers to participate in the investment and transfer of new technologies to the sector in order to help boost our exports,â€ Bung said.
H&M, Next, C&A, Debenhams, Inditex, Kmart-Australia and Primark were some of the global companies represented at the meeting, as well as international union federation IndustriALL. Frank Hoffer, the executive director of Action, Collaboration and Transformation (ACT), who spoke on behalf of participating global brands, said one of their priorities as buyers is to strengthen cooperation among all stakeholders in the garment and textile industry. ACT is an initiative between international brands and retailers, manufacturers and trade unions to address the issue of living wages in the textile and garment supply chain.
Hoffer especially asked for enhanced discussion with the government on the state of the industry. He requested the MoCâ€™s support to set up a workshop with buyers, unions, factory owners and government agencies to hear from all sides and collectively prepare a strategy to guide development in the sector. â€œI would also like all stakeholders to aim for a healthy balance between minimum wage and productivity that would benefit workers, as well as buyers and factory owners,â€ Hoffer said.
Ken Loo, the secretary-general of GMAC, said recently that garment exports will be expanding at a rate of five percent by the end of the year, adding that he expects similar growth in coming years if certain issues hindering the industry are addressed. He said issues now hampering the sector include high production costs, low productivity and access to a limited number of markets. â€œIf we take care of these issues, the industry will continue to grow,â€ he said. â€œWhen the minimum wage is raised to $170 in January, more factories will encounter difficulties if things donâ€™t change. We hope there is a change in productivity, a reduction in the cost of doing business and new governmental policies to help investors,â€ he added.
According to the MoCâ€™s figures, Cambodiaâ€™s total export volume reached $9 billion during the first nine months of the year. Eighty percent of that trade consisted of garments or footwear. In 2016, Cambodiaâ€™s garment and footwear industry had 786 factories and a workforce of more than 700,000 people. The main export markets for Cambodian garments are the EU, the US, China, New Zealand and Japan.
CATEGORIES Industry Update
TAGS ACTCambodianDebenhamsFrank HofferInditexKmart-AustraliaModernise
Share This