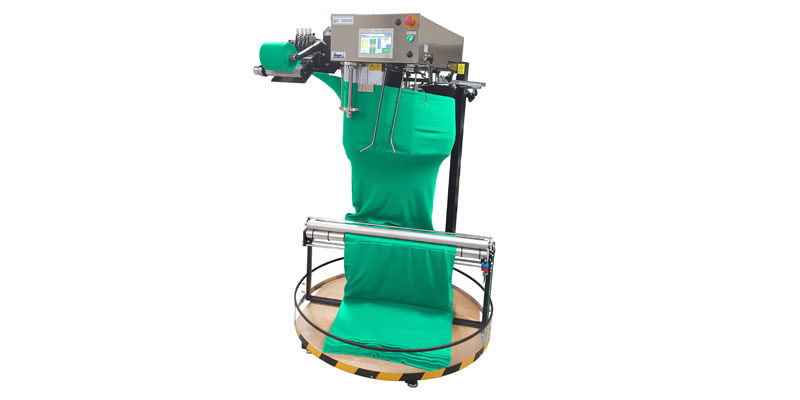 Automation for Brazil: TMAS at Febratex

A delegation from TMAS, the Swedish textile machinery association, will participate in the forthcoming Febratex textile show which is being held in the German Village Park in Blumenau, in Santa Catarina, Brazil from August 23-26.

As the fourth largest textiles manufacturer in the world, Brazil’s annual revenues from textiles and apparel amount to an annual $48 billion and the industry employs around 1.5 million people directly.

“Brazil produces around 3.1 billion apparel items each year, largely based on its strong position in cotton, and there is a tremendous interest in new textile technologies that can enhance productivity,” says General Therese Premler-Andersson , Secretary,TMAS. “There are also over 100 textile schools and colleges, which illustrates the opportunities that are perceived in the industry’s future.”

As with the USA and many European countries, product shortages resulting directly from the Covid-19 pandemic, and subsequent supply chain difficulties, have emphasised to Brazil’s industry the attractiveness of more diversified and shorter supply chains which are closer to customers wherever possible. In the past two years, there has been less reliance on imports from Asia to Brazil, and opportunities are arising again for local manufacturing.

Caption for the image: Svegea of Sweden’s latest EC 300 automatic collarette cutter has an output of around 20,000 metres per hour.

Svegea of Sweden has supplied many automatic collarette cutters to Brazilian companies, which are used by garment manufacturers around the world for the production of tubular apparel components such as cuff and neck tapes and other seam reinforcements.

The company’s latest EC 300 machine has an output of around 20,000 metres per hour and is equipped with the latest E-Drive 2 system, providing the operator with a very user-friendly touchscreen, providing full control of the cutting process.

“A key function is the ability to ensure perfect synchronisation of the tubular fabric between the machine’s turntable platform and its upper cutting body,” explains Håkan Steene , Managing Director, Svegea. “Advances in automation are only making the specialised, bespoke machines we engineer even more efficient. The garment components our collarette cutters produce make it logical for them to be integrated into the operations of making-up operations wherever they are, and at the moment we’re seeing a lot of interest in the reshoring of operations by our customers.”

Svegea supplies many other bespoke machines for applications in the production of both garment components and technical textiles, including rewinding, measuring, inspection and band knife machines.

Eton Systems, the inventor and world’s leading provider of automated production systems for apparel and other textile-based processes, has supplied thousands of workstations to Brazilian companies over the years, and believes its newly-launched Opta system is good news for this market.

“When we started designing the Opta System, our main goal was to honour our roots,” explains Jerker Krabbe, Managing Director, who knows the market well, having lived in Brazil for a number of years. “The Opta System is here to help businesses in the fashion industry to become more efficient and profitable.”

The Opta system keeps all of the key features that garment manufacturers need.

“What we’ve added are more station types and optimised software,” Krabbe says. “With three kinds of stations, supporting dual transporting rails, connecting bridges between lines and buffer stations, Opta provides even greater flexibility for future extension. The software contains all the key features a garment manufacturer could need and our goal is that customers will have complete control throughout their value-adding chains. Transparency in operations is key.”

Automation is also high on the agenda of ACG Kinna Automatic, which specialises in automation solutions for filled products such as quilts, pillows and mattresses and also has extensive knowledge in areas such as bed linen and textile filters.

“It has become evident over the past few years that a higher level of automation across the entire textile and apparel supply chain is the key to higher efficiency, productivity and performance,” says Christian Moore, CEO.“What we’re seeing now is the emergence of companies bringing back production to local factories which are closer to the consumer and eliminate many of the transportation costs which have rocketed recently, as well as being able to produce on demand. Everything is now about digitalisation and automation and ACG Kinna Automatic is well placed to assist in this industry transition.”

Given Brazil’s extensive forestry sector, the country is a key market for Texo AB, one of the world’s leading manufacturers of weaving machines for the production of paper machine clothing (PMC).

All paper manufacturing machines require a regular supply of PMC, which as large continuous engineered fabrics, carry the paper stock through each stage of the paper production process. With technologically sophisticated designs, they employ fibres and other polymeric materials in complex structures and each paper machine has an average of ten separate fabrics installed on it. Although the PMC business represents just a small proportion of the total cost of manufacturing paper, it can have a significant impact on the quality of the paper, the efficiency of a machine and machine production rates.

“Brazil is the second largest pulp producer in the world after the United States, accounting for more than 11% of global production, and also among the ten largest paper-producing countries in the world,” says Anders Svensson, President, Texo. “Our looms are built to last, and in addition to supplying new machines, we are currently very active in the retrofitting of many existing machines out in the market. These machines are rigid and strong and we are still supporting many of them with mechanical spare parts. They can, however, also be equipped with the latest technology for automation. With new controls, drives and motors they can perform as well as the latest machines. We look forward to discussing the possibilities with customers old and new at Febratex.”