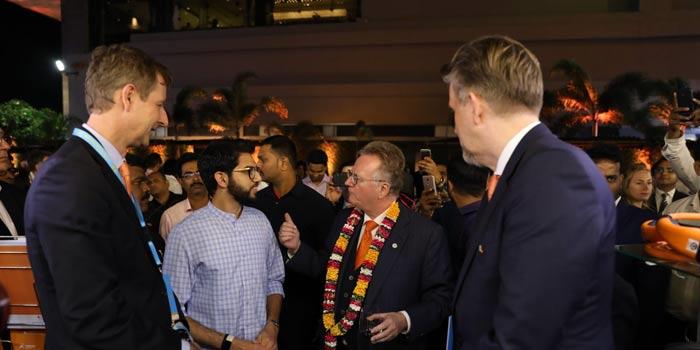 The wine festival is a celebration of the long and enduring partnership between the twin cities of Stuttgart and Mumbai. The festival is the ideal platform for promoting Indo-German relationship since it witnesses high level decision makers from politics, education, culture and business sectors.

Like all years, the 16th Wine Festival was inaugurated by Andreas Lapp, Honorary Consul of the Republic of India for Baden-Wuerttemberg and Rhineland Palatinate and Chairman LAPP Group. On this occasion, delegations from the state of Baden-Wuerttemberg, the city of Stuttgart and the city of Karlsruhe travelled to Mumbai. The first day the event was graced by Aditya Thackeray (Cabinet Minister of Tourism and Environment Government of Maharashtra); Kishori Pednekar (Mayor of Mumbai); Suhas Wadkar (Deputy Mayor of Mumbai); along with Dr Alexandra Sussmann, Mayor of Social Issues and Social Integration, City of Stuttgart and Theresa Schopper, State Minister of Baden-Wuerttemberg. Also present at the event for the second day was CN Ashwathnarayan (Deputy Chief Minister of Karnataka).

Marking the occasion, Andreas Lapp said, â€œLAPP India is currently the LAPP Groupâ€™s biggest operation outside of Germany. Ever since we set up our office in India in 1996, we have aimed to strengthen the business ties between Stuttgart and Mumbai. This partnership is a movement to strengthen the exchange and cooperation in various areas, including business, health, education, and tourism.â€

Like every year, the festival served award-winning wines from the twin cities and German culinary specialities. Additionally, two talented young chefs demonstrated their skills during a live cooking show. The celebration in the evening was marked by the performance by Oorja Dance Company, that showcased an extraordinary dance program of Indian and western dance elements.

LAPP India is a 100 per cent subsidiary of the LAPP Group. Having started its operations in 1996, LAPP India provides about 150,000 km per year of power, control, and instrumentation and data cables.