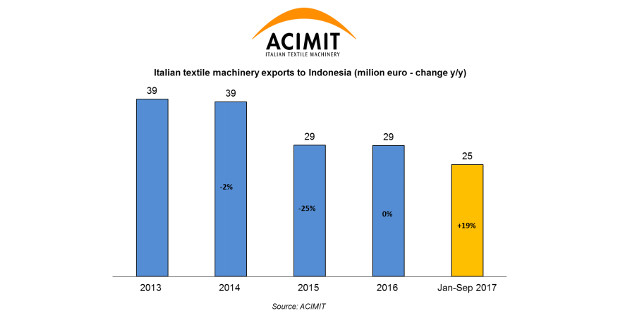 Bearing witness to the interest in Italian technology on the part of the Indonesian market,an Italian exhibition area will be present at the upcoming edition of Indo Intertex, to be held in Djakarta from 4 to 7 April.

The textile industry is a major driving force for Indonesiaâ€™s national economy. In recent years, the local government has thus supported a widespread modernization programme of existing technology, allowing for increased exports in the garment industry, and making Indonesia the 8th largest exporter in this sector worldwide, according to the latest data from the World Trade Organization.

Italyâ€™s textile machinery sector has also benefitted from this increased demand in cutting edge technology on the part of textile manufacturers. â€œOver the course of the past few years, Indonesia has represented one of the primary markets in Asia for our machinery manufacturers,â€ states Alessandro Zucchi, President of ACIMIT, â€œwith roughly 25 million euros worth of Italian machinery sold over the first nine months of 2017, a 19 per cent increase over the same period for 2016.â€

â€œBearing witness to the interest in Italian technology on the part of the Indonesian market,â€ adds Zucchi, â€œan Italian exhibition area will be present at the upcoming edition of Indo Intertex, to be held in Djakarta from 4 to 7 April.â€ A total of 13 Italian machinery manufacturers will be on hand in the common exhibition area set up by the Italian Trade Agency and ACIMIT, the Association of Italian Textile Machinery Manufacturers. Among the companies exhibiting in the Italian area are the following ACIMIT associated members: Bonino, Busi, Caipo, Cognetex, Lgl, Mcs, Ms Printing Solutions, Red Carpet, Santex Rimar Group, Sei Laser, Sicam, Ugolini.

Italyâ€™s participation at Indo Intertex is part of an intensive programme of trade initiatives aimed at promoting the Italian textile machinery industry in Indonesia. In addition to participating in previous editions of Indo Intertex, recent activities carried out in partnership with the Italian Trade Agency include various technology symposia at major Indonesian districts and a variety of incoming missions in Italy by Indonesiaâ€™s textile operators.