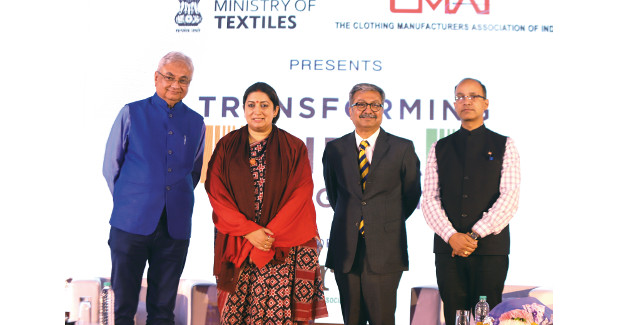 Honâ€™ble Minister of Textiles, Smriti Zubin Irani launched the Indian Size Project in collaboration with CMAI recently at a function held in Mumbai.

adminFebruary 12, 2019 12:00 am 0
Honâ€™ble Minister of Textiles, Smriti Zubin Irani launched the Indian Size Project in collaboration with CMAI recently at a function held in Mumbai. Also present at the event were Raghvendra Singh, Secretary Textiles, and Ajit B Chavan, Secretary, Textiles Committee.

The first-of-its-kind Project in the Indian
history, â€˜Indian Sizeâ€™ will feature a size chart that is specific to the Indian Consumerâ€™s measurements. The Clothing Manufacturers Association of India (CMAI), working with the Union Ministry of Textiles on this project unveiled the
â€˜Indian Sizeâ€™ logo, signaling the launch of an all India anthropometric study of the measurements of the average Indian consumer. The study will see an analysis of close to 25,000 consumers spread over various age groups, and covering the cities of Mumbai, Delhi, Chennai, Hyderabad, Kolkata, and Shillong. This will enable the study to cover all regions of the country.


The Indian Size will put the country on par with
all the developed countries, which typically follow a standardised size for their consumers â€“ such as the
US Size, UK Size, Mexican Size, etc. The Indian Size will provide tremendous benefit to the Consumer by offering standardized sizes, better fitting clothes, reduced hassles of purchase returns, and reduction of wasteful expenditure on wrong purchases. To the manufacturer, it will enable minimisation of wrong inventory being piled up, expenses on returned goods, and better sales. All these factors will reduce ultimate prices to the consumer. With better sales, increased consumption, and lower expenses, Investments will also go up in the industry.
With increasing spread of the Indian diaspora across the whole world, such an Indian Size will also increase exports from India to such diaspora. Speaking at the function, Rahul Mehta, President, CMAI, said, â€œWe have been following international sizing charts all these years and every brand which is launched in India also follow their own charts. This creates disparity for the Indian consumers. With the launch of Size India project, there will be a standard size for all manufacturers and will
help the consumers shop online and offline by making size identification easier.â€
CMAI also announced the launch of a Study of the Apparel Consumption in India. Representing over
45,000 apparel manufacturers and retailers, CMAI will
be conducting a study over three to six months for arriving at an accurate assessment of the total apparel consumption in the country â€“ thereby resulting in more accurate business projections, aid marketing strategies, and a more confident investment into the Industry.
The report would be ready for release by July 2019.
The Minister along with the Secretary, Textiles unveiled the two glittering Logos â€“ the Indian Size logo and the India Apparel Consumption logo at the event.
The evening also saw CMAI, supported by RAI (Retailers Association of India) along with the Ministry
of Textiles, recognise and honour retail brands and retailers who, with their innovative, bold, and creative thought processes, have transformed retail in India, and in fact helped Transform India through Retail. These are the Brands and Individuals who have had tremendous impact on the social fibre of society, have transformed the lives of thousands of artisans and brought traditional products to Modern Retail. The Minister honoured 19 such outstanding retailers who have transformed the way retail is conducted through their business models.
Irani applauded the CMAI for having come up with the proposal for the Indian Size Study, and for conducting the long overdue survey of the Apparel Consumption in India. Whilst the Textile Committee has been undertaking such a survey, this would be the first industry-led study in to the consumption patterns in the domestic market.
The Textiles Minister also informed the audience of
a new initiative suggested by CMAI, which was accepted by the Minister, which was to provide a direct link to powerloom weavers to modern retail. The Secretary, Textiles would be leading this initiative in collaboration with CMAI.
CATEGORIES Allied Equipment and Accessories
TAGS cmaiIndian Size ProjectMexican SizeRahul Mehta.Retailers Association of IndiaUK Size
Share This