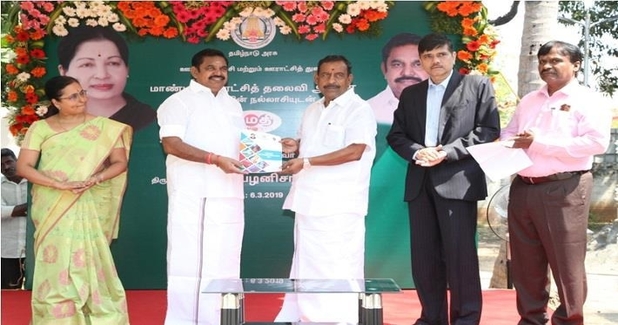 Tamil Nadu has announced its integrated textile policy, which aims at sustainable growth of the entire textile value chain and promotion of technical textiles.

adminMarch 8, 2019 12:00 am 0
Tamil Nadu has announced its integrated textile policy, which aims at sustainable growth of the entire textile value chain and promotion of technical textiles. Released by Tamil Nadu Chief Minister Edappadi K Palaniswami, the new policy also encourages setting up of the textile industry in the 12 southern districts of the State.
As per the new policy, announced after a gap of around 20 years, the State Government will provide 100 per cent stamp duty exemption for technical textile projects, give 6 per cent interest subsidy for technical textile projects in addition to incentives from the Central Government, and 9 per cent of the project cost as State grant to set up technical textile parks under the Scheme for Integrated Textile Parks (SITPs).
For the handloom sector, the interest subsidy extended to primary handloom weaversâ€™ cooperative societies has been increased to 6 per cent from the existing 4 per cent and allocation for the rebate subsidy scheme will be hiked to Rs 150 crore a year from the existing Rs 80 crore. The Government will also make efforts to set up silk parks in clusters such as Kancheepuram, Salem, Arni and Thirubhuvanam.
Under the Amended Technology Upgradation Fund Scheme (ATUFS), the government will provide an additional 10 per cent capital subsidy to help powerloom units go in for new shuttleless looms. Also, under the PowerTex India Scheme, the government will provide subsidy for buying new preparatory machinery, and for upgradation of plain looms.
A 2 per cent interest subvention would be provided by the state government for investments in technology upgradation and modernisation in existing textile mills that have vintage period of minimum 15 years on installed machinery.
The government will conduct a detailed study on new and emerging textile products that can be exported from the state at competitive price. The study will be conducted with support of organisations like the Federation of Indian Export Organisations (FIEO).
The policy offers special packages for textile industries being set up in twelve districts of southern Tamil Nadu, i.e. Kanyakumari, Tirunelveli, Thoothukudi, Virudhunagar, Ramanathapuram, Sivagangai, Madurai, Theni, Dindigul, Pudukottai, Ariyalur and Perambalur districts.
CATEGORIES Industry Update
TAGS Tamil Nadu textiletechnical textilesTextile Industrytextile newsTextile Policytextile value chain
Share This